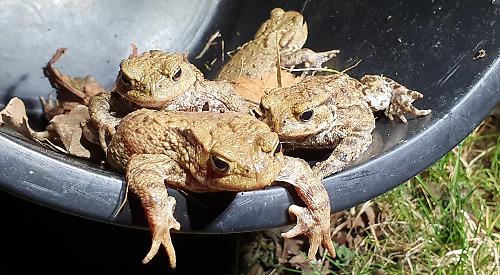 NEARLY 6,000 toads have been helped by volunteers from the Henley Toad Patrol this year.

The group assists with the annual migration from the Culden Faw Estate to the other side of of the A4155 Marlow Road to a pond where they spawn.

Since February, the group has helped more than 5,900 toads, 250 common newts and 120 frogs, taking them across the road in buckets.

The patrol will continue for at least another week in the hope of a few more mild and wet nights to encourage movement.

Only two volunteers are present at the same time to comply with coronavirus restrictions.

Professor John Sumpter, a member of the patrol, said Thursday had been the only busy night last week. He explained: “More than 200 toads were taken to the spawning pond and 250  that had completed spawning were taken back across the road and released into Oaken Grove Wood, where many of them will probably spend the next 10 months.

“Although vehicles on the road remain the main cause of amphibian casualties, a number of volunteers have reported seeing injured toads, mainly on their backs. For a while we were unsure who the perpetrator was but we now believe that it is mice, probably wood mice.

“A number of volunteers have seen toads or frogs being attacked by mice and one actually rescued a male toad from the jaws of a mouse.

“On another occasion a few days ago, volunteers saw two mice attacking a toad. Nature is rarely as kind as many people think.”