Twins run 148km in aid of children with brain injury 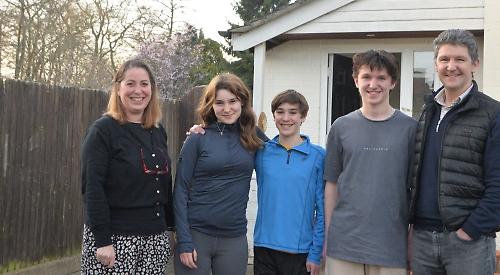 TEENAGE twins from Binfield Heath ran 148km over a month for a charity.

Tom and Mima Bonser, 13, were raising money for Robbie’s Rehab, which is named after a 10-year-old boy who died from a brain tumour almost five years after his mother died from breast cancer.

The money will go towards a new neurological rehabilitation ward for children at University Hospital Southampton.

Tom amd Mima completed the distance between Henley and Southampton during March, running separately in the evenings for up to 40 minutes at a time.

The twins, who are in year 9 at Gillotts School in Henley, liked to run in a field off Heathfield Avenue, where they live with their parents Olly and Henrietta and brother Will, 15.

They would run 3km and 4km every day with Tom trying to run as quickly as he could while Mima focused on endurance.

Mima said she felt “shattered” by the end of it.

“I have a few blisters but I knew I was doing it for a good reason — that’s how I kept going,” she said.

“Our friends at school have been really supportive. They keep telling us ‘thank you for doing this for these children’ and have also been donating to the cause.”

Tom said: “During a run I was focusing on running and I only really got tired towards the end. When I got home, I laid on the floor and our dog licked my face and I knew I could rest.”

At the end of the challenge their parents were waiting at the finish line with Easter eggs and hot chocolate to celebrate raising almost £3,000.

The pair decided to raise money for Robbie’s Rehab after reading a leaflet about the charity.

This explained how founder Mark Keville lost his wife Kate to breast cancer in 2011 at the age of 48 and in 2016 his son Robbie.

The ward will be the first of its kind in the UK to be run by the NHS.

Mr Bonser, 50, who is head of development at a legal firm, said: “I think what the twins have been doing shows that something beautiful can come out of sadness — and it all came out of that one leaflet that Tom found by chance. We are really proud of them — we didn’t tell them to do it, it’s all down to them.

“It was nice for them to go out and do something like this and sport had stopped during lockdown so this allowed them to keep active.”

Mrs Bonser, who is matron at Shiplake College, said: “Running for the charity is something that they came up with. I’m so proud that they want to make a difference, I think it’s really important that they grow up helping others.”

The twins have met Mr Keville multiple times since he has married again to Floss Keville, a friend of their mother, and has five chidlren.

Mr Keville said: “Tom and Mima are such fun and loving kids — I’m sure they would have gotten on with Robbie if he was around.

“What they have done for the charity is fantastic and the money they have raised will be absolutely vital for the ward. We are not there yet but we are getting so close thanks to their help.

“This was kids helping other kids and that is what the charity is really about — kids are the future.”

Meanwhile, Freddie Piasecki, 14, from Peppard Common, who goes to Gillotts with the twins, was inspired to start his own fundraiser for Robbie’s Rehab.

Freddie’s mother, Jo Piasecki, said: “Mark’s story is so tragic and Freddie wanted to do something to help. I’m really proud of him.

“I think it’s brilliant that Freddie, Tom and Mima want to help to raise money and it shows that the younger generation is so generous.”