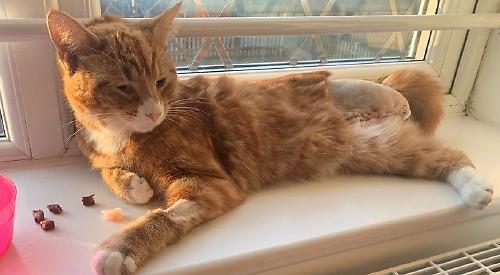 A WOMAN from Kidmore End wants speed bumps installed in her street after at least one of her cats was killed and another was seriously injured by passing vehicles.

Donna Long, who lives in Craysleaze, off Wood Lane, is urging drivers to slow down after the latest incident three weeks ago when her ginger female cat Elmo was hit by a car and had to have a leg amputated.

Elmo was luckier than Mrs Long’s previous two cats, one of which died after being run over and the other went missing and she believes was also killed on the road.

“Elmo’s so lovely and sweet,” said Mrs Long. “The worry is always going to be that I’m going to lose her. She’s used to going out so we’re going to let her but that road will take her.

“Eight out of 10 drivers go steady but they do come quite close to the front garden.”

The street has a 20mph speed limit but Mrs Long says it is used by drivers as a short cut to get to the A4074.

She said: “My concern is that if they build on Reading golf course in Emmer Green the traffic will get worse.

“I haven’t got anything against people using this lane but they need to slow down. My main concern is the speed people go at.”

Mrs Long, 51, lives with her husband Mark, 57, and their 11-year-old cocker spaniel Maggie.

When they moved to the village four years ago they also had a three-year-old ginger tom called Marley but he was fatally injured on the road just five weeks later.

Mrs Long said: “He came back in the house crying, covered in blood and died in front of us — it was horrible.”

The couple thought the incident was a one-off so about a year later, they got another ginger tom, Reggie. He was 15 months old when he went missing.

Mrs Long said: “We never found him so we can’t say for sure he was run over but he had obviously been killed.”

The couple got Elmo, who is also ginger, in November 2019 when she was about 18 months old.

“We thought she was a boy, which is why we named her Elmo, but then we were told at one of our first vet appointments that she was a girl,” said Mrs Long.

“We thought we would have her as a house cat but when the lockdown started I thought what a perfect time to let her out as the road was quiet and empty. She went out and it was absolutely fine but over the last few months the road has got busier again.”

On the day of the incident her husband heard a car stop abruptly and then pull away quickly.

“Elmo then came inside hobbling,” said Mrs Long. “I said, ‘Oh Christ, she’s been hit’. She hid behind the sofa and then ran upstairs and I could see her back left leg was nothing.”

Mrs Long took the cat to Henley Vets which said her leg was broken in three places and needed to be transferred to the Hampden Veterinary Hospital in Aylesbury for surgery.

She said: “The nurse told me that the operation would cost about £4,000 and I thought, ‘Gosh, I better dig out a card’.

“The vet asked if I had considered amputation of the leg, which would cost £1,000. She said it was a bad break and it may need to come off anyway so I spoke to Mark and my kids, who are grown up now, and they said it was for the best.”

Mrs Long, who is a cleaner, was able to pick up Elmo two days later after paying a total bill of £1,500 for the amputation.

She said: “You find the money, it’s not about that. The cats are my fur babies; my adult babies have left the nest.

“I don’t want to let her out but Mark said I can’t keep her inside. She’s used to going out now so we’re going to let her.

“It would be difficult not to leave windows open and to keep saying, ‘Close the door’. It’s not possible to keep her inside.”

Mrs Long said drivers should obey the speed limit, adding: “If these people had been driving at 20mph they would have been able to stop.

“You would know if you had hit a cat — if that was me I’d have stopped and done something.”

She has made a small scarecrow wearing a high-visibility jacket and put it on display outside her home to remind drivers to slow down.

She also plans to ask the parish council about the possibility of official safety measures.

“I would like to see more speed bumps or a chicane,” she said.

A 20mph speed limit was introduced in Chalkhouse Green Road, Wood Lane, Tokers Green Lane, Kidmore Lane and minor side roads in 2017 as a result of the community speedwatch initiative.

Parish councillor Adrian Whyles, who has been campaigning against speeding in Horsepond Road, Gallowstree Common, said: “It is a shame that the subject of traffic speeds only ever seems to grab the attention when there is sad news.

“I am very determined to address this issue. We currently have a number of speed surveys in operation and I am confident that this is the first step towards making some overdue changes to how our roads are managed.”