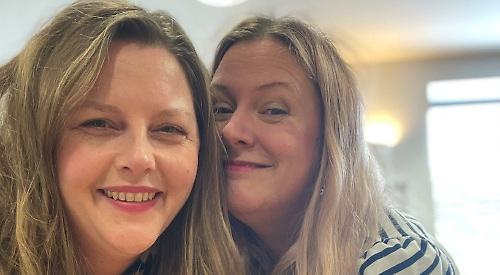 AN art school that was at risk of closure almost exactly a year ago is back in the black.

Founder Jo Harris closed the Henley School of Art in March last year before all non-essential businesses were ordered to shut to combat the spread of coronavirus.

She received a £10,000 government grant which helped to pay the rent of her studio and refund two-thirds of her customers who had had their classes cancelled.

Miss Harris switched to online classes to try to keep her business afloat but by the summer she had to again consider closing for good.

But just as she was about to pull the plug she came up with the idea of sharing The Studio, off Hart Street, and fellow illustrator Holly Surplice came on board.

“I nearly shut the school,” said Miss Harris. “It was at death’s door and was rescued at the very last minute after I came up with the idea of sharing the studio with someone else.

“I put a request out on social media and Holly said she was interested. We met up and found that we both wanted the same thing and she came on as my business partner.

“So now there are two different but complementary brains and now the school has gone in a different direction as a result of coronavirus and has produced this incredible new situation where we have been a lot more online.”

The pair spent some time building up the school’s online presence to try to attract new artists and while it used to work with people living in Oxfordshire, it now has customers from London and Cheltenham and as far as Los Angeles, Japan and Russia.

Miss Harris, who lives in Newtown Gardens, Henley, said: “We are now in good nick and our little school of art has become global.

“This is a temporary situation in the grand scheme of things because we will open the studio again, but we will look to continue our online offering as we now have a following all over the world and our artists have said we can’t stop it because they are addicted. Financially, we are not Billy Big Bucks because we do a lot of human and animal life drawing, which costs quite a bit of money.

“Animal handlers still need to be paid and their sanctuaries have been in trouble and we do want to try to support them.

“We did an amazing class recently with the Dian Fossey Gorilla Fund where they sent us a video on them in their natural habitat, which we edited.”

Miss Harris said that while her current wage was “pathetic” it was putting food on the table and allowed her to keep up with her mortgage payments.

She said: “I’d say breaking even would be fair but we are not comfortable and it has been a really difficult job to keep all the social media updated.

“We are going in the right direction and hopefully we will start to make a bit of money in six to eight months.”

Miss Harris said the pandemic had nearly caused her to lose the business she founded almost eight years ago.

She said: “After the first lockdown I had spent my time booking a year’s worth of classes up front until the end of Christmas. But when the next lockdown came, while a third of my customers were very supportive and kept their bookings, two-thirds wanted their money back.

“So with having to pay back refunds I was on the verge of bankruptcy. The business was at its peak when covid came and almost made me bankrupt within 24 hours. I really thought that I had to pull the plug as I am not a businesswoman, I learn things as I go, but it was my landlord who said to stay calm and think of a way to work it out. He is just a splendidly kind man who could see that I was all over the shop.

“Then I came up with the idea of sharing the studio. At the end of the studio is a storage area where we have put two working spaces with desks — we call them pods — where we do our illustrations and other work. It has separate entrances and even separate bathrooms, so it couldn’t work any better. It is the perfect set-up.”

Ms Surplice, who is originally from Scotland and moved to the Henley area in 2012, studied at Edinburgh College of Art, gaining a first class honours degree and then a master’s.

“I went to see her to drop off a painting and as I walked in the studio I could feel the warmth and it was a bright and creative space.

“Teaching was something I really loved — I did it for seven- and-a-half years at the Edinburgh College of Art and thought, ‘Why not?’ The thought of teaching something at the art school ignited this spark in me.”

After joining forces in September, the duo now hold a series of classes each week on life drawing for beginners and those who are more advanced.

For those students who can’t “attend” a session, they can download it afterwards.

Ms Surplice said: “They get Jo for an hour and she teaches them all the rules of drawing or painting and I then have the second hour and tend to bend those rules with colour and movement — you get the yin and the yang.

“We are not asking them to replicate the way we work but the idea is that we give people the confidence to be creative.”

Miss Harris said: “Our first class had 60 people and was sold out. We also send out an artists’ kit with all the materials that we would use and we have been sending them to Austria and Germany. The feedback has been amazing. They love getting the kit.

“I was very nervous about it because I like that contact and energy you get from being in the classroom but the feedback has been great.

“If people have drawn before they are getting to use materials or skills they perhaps haven’t used or experienced before, but we also have a lot of people come to us who haven’t drawn since school or college.

“Then there are people who want to try it because we have found that during the lockdowns people need entertaining too. The last year has given people that chance to do something for themselves.”

The women now plan to run a summer school from June before fully opening up again in September with a full range of courses and workshops.