Girl, nine, walks on the wild side 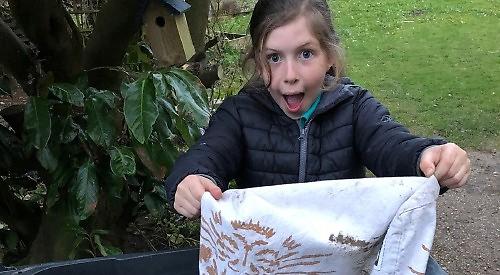 A GIRL walked 125 miles in 31 days to raise money for a wildlife charity.

Rosie Mills, nine, also picked up litter as she walked along the streets and in woods near her home in Nettlebed.

She began on March 1 and finished on Wednesday after completing an average of more than three miles a day.

Her cousin Alexa Bacon, eight, was doing exactly the same thing near her home in Essex and between them the girls raised £2,792 for Rewilding Britain, a charity that aims to tackle the climate emergency and extinction crisis.

Rosie, who attends Nettlebed Community School, said: “It is amazing what you can do if you put your mind to it.”

She walked every day, including almost two miles to school and longer treks in the woods at weekends with her parents, Adam and Diana, and siblings, Eloise, seven, and George, three.

She always took a litter-picker and bin bag with her to collect rubbish, which will be weighed and then sorted so as much as possible can be recycled.

Rosie said it felt “amazing” to have raised so much money. “So many people believed in us, which showed that they cared about the countryside too,” she said. “The world needs more people to show that they care and together we can make a difference. It is our future we are fighting for and we have to stand up for it.”

Mrs Mills, who is on the support staff at Rosie’s school, said she was overwhelmed by the support for her daughter.

She said: “Friends and family have been so generous but the donations from complete strangers has blown us away. The encouragement really boosted the girls’ spirits, especially when the weather was really bad and they continued regardless. We never expected it to go this far but clearly litter-picking and protecting our countryside is a real trigger for people.

“The charity’s work means so much and this money really can go a long way to supporting wilding projects in Britain.”

Mrs Mills, who walked to school with Rosie, said: “The route is mostly clean now but there is the odd coffee cup, beer or energy drink can that reappears, which is sad. On average we collected a bagful on each walk and at weekends we collected two huge grain sacks, approximately 8kg, over a 5.5-mile walk.”

Rosie said: “Sometimes it was hard, especially in the bad weather, when the paths were very muddy. But as the weather got better, it was lovely being out and it was like freedom after a long day at school.

“I feel very lucky to live in such a lovely area and walking is a great way to get to school. I feel healthier now and have more energy, although I am very tired at the end of the day.” Rosie came up with the idea with Alexa, who is the daughter of Mrs Mills’ brother, Nick, on a family holiday in Canada when they were “shocked” to see so much wildlife compared with at home.

Mrs Mills said: “The girls have a club called Team Chipmunk that they started with their siblings as chipmunks were their favourite things to spot.

“They have been using Zoom and Facetime to have their team meetings about rules for the club such as be kind and help wildlife.”

The cousins decided to call the challenge the Team Chipmunk 100-Mile March after Mrs Mills pointed out the girls could do something to help wildlife if they wanted.

Rosie, who says she wants to be a vet when she’s older, said: “I decided to take on the challenge because I have been watching a lot of David Attenborough programmes and it made me and Alexa sad about the destruction in the world.

“We also see all the rubbish that is around and wanted to highlight the issues of litter in the countryside. It makes me sad that people think it is okay to throw rubbish out of their cars or into the woodland.”

She said: “She saved many animals over the first lockdown — baby jays, abandoned blue tits, a baby rabbit and voles. On the back of it, she is keen to spread the word on ways to boost garden wildlife and local commons, hopefully lobbying and working with the parish council and MP to make changes.

“This month has really highlighted how amazing walking makes us feel and really set us up for a summer of adventure. We have so much amazing countryside to explore and protect.

“We are humbled that so many people have supported the girls.”