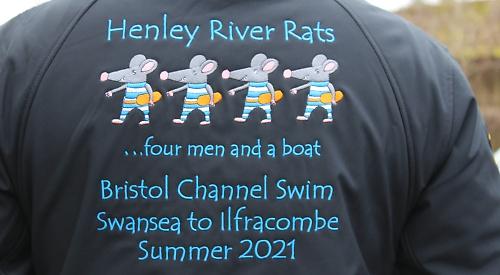 FIRST there were the Mermaids and now there are the Rats.

Four men are to attempt to swim the Bristol Channel in relay for charity this summer.

Phil Warren, Mark Reed, Mike Wood and Tony Baxter, who call themselves the Henley River Rats, will attempt the challenge without wet suits on Tuesday,
July 6.

Exactly 16 days later, the five women who make up the Henley Mermaids are to take on the same swim, attempting to become the first all-female team to complete it.

They swam the Channel together last summer and raised £35,000 for Henley Music School.

All nine swimmers are members of Henley Open-Water Swimming Club.

The Bristol Channel is a 45km stretch of water between Swansea in Wales and Ilfracombe in North Devon and is hazardous because of its strong tides.

The Rats, who are all experienced swimmers, are to take on the longest of the five routes, which should take between 15 and 24 hours.

They will swim in relay for an hour at a time and rest on a pilot boat in between legs.

They hope to raise £5,000 for mental health charity Mind. The men have all experienced mental health problems at some stage in their lives and say swimming plays a key role in helping them.

Mr Warren, 50, of Whitehouse Road, Woodcote, came up with the idea of the challenge in December as he thought it would be good to have a distraction from the coronavirus pandemic.

He said: “We were talking about how lockdown was affecting us all and our mental health. We decided that we wanted to do something to take our minds off it.

“We’d heard a lot over the past year or so about the Henley Mermaids and what they’d achieved, so we wanted to give them a bit of competition.

“I don’t know if they were best pleased to start with but now they are completely behind us, just like we are behind them. It gives us motivation to make sure we are not slacking, or getting behind on our training.”

Mr Warren, a self-employed electrician, had a breakdown five years ago and has suffered with depression on and off ever since. “I wouldn’t be where I am today without swimming,” he said. “I have to swim at least twice a week to keep things on the straight. It just resets my system and clears my head of the day-to-day stresses.”

The Rats have been training in pairs in the River Thames and hope to be able to swim in the sea before the challenge.

Mr Warren has completed the Thames Marathon twice and holds the event record for the breaststroke. He represented Great Britain at the World Ice Championships in 2019 and took part in a club trip to the Arctic four years ago.

He recalled: “A lot of us went and we did two swims. One was a 3km swim and the other was 2km. The 3km is done at midnight and so it is still light because of where it is. You swim from Finland to Sweden over the 3km but if you are fast enough you arrive in Sweden the day before you started, so you actually go back in time.

“Ironically, it was the warmest year they’d ever had, so it wasn’t actually that cold.

“The Bristol Channel is a totally different ball game. From our research, we believe that this route has only been completed once as a relay and twice solo. The relay was done in wet suits and we’re going to be swimming according to the Channel rules with no wet suits.

“We’re all quite upbeat about it. At the start we were thinking, ‘Oh my God, what have we done?’ but now we’re up for it and can’t wait to start. The only reason that we won’t complete it is if we’re pulled out on safety grounds.”

His biggest achievement to date was completing the Scilly Swim Challenge, off the coast of Cornwall, in September. This involves swimming 15km between six islands.

He has also completed the Jubilee River Swim between Windsor and Maidenhead, the Club to Pub Swim in Henley and the Henley Classic.

Mr Wood, 44, said: “This challenge will be right at the top of my list. My biggest fear is swimming in the dark and something touching me.

“Even though I swam around Scilly in the sea, we’re mainly river swimmers and there is a big difference.

“In the river you are always close to the bank but being in the middle of a massive expanse of water is not what we’re used to. The waves, the chop and the wildlife are all unfamiliar.”

He works as the head of the solutions consulting team at True Fit, a fashion technology company. Last summer he also started his own bakery business called Major Porkington’s, selling gourmet sausage rolls and scotch eggs to the pub trade.

Mr Wood has experienced depression since his mother, Jeanne, died from cancer when he was 21.

He said: “It has definitely shaped my life. It is important to raise awareness that mental health problems can affect
anyone.

“There is still some stigma attached to it. I’m originally from Blackpool and the attitude there is very stoic — you don’t talk about your emotions and feelings but the more it is talked about, the better.”

Swimming has helped him hugely. Mr Wood said: “A positive channel for things is very important and having a support group is too. I’m not quite sure how I would have got through the last few years without that.

“I hadn’t been in a club before joining Henley. I didn’t really know anyone when I moved here, so being middle-aged and single meant the club was a really good way of getting to meet people.

“I noticed, particularly during the last year, that when I haven’t been able to swim and see those people, I really struggled. I did get quite depressed, so it is a lifeline to me. One of the things that has kept me sane is the swimming and meeting people.

“We are a really close group of friends and keep an eye on each other. If we’ve not heard from someone in a while, we make sure we send them messages, so it has become a support bubble within the wider group.”

Mr Reed, 56, a retired social worker from Caversham, was diagnosed with bipolar disorder in 2001 and says swimming is “massively important” to his mental health.

He explained: “I can wake up not feeling great but if I go for a swim it changes the day and I feel so much better afterwards.

“It is something I have to live with day-to-day, coping with a wide range of moods.

“I am well medicated now and for the most part I am fairly stable but you have dips and also highs that you have to manage. Open-water swimming is part of my medication.”

Mr Reed joined the club in 2014 and completed the Thames Marathon for the first time that year and again in 2018. He also took part in the trip to the Arctic. He says he has made many friends through the club and believes the Rats’ collective experience in the water and the camaraderie they share will be more than enough to help them conquer the Bristol Channel.

He said: “We will all be putting in a huge amount of work over the next few months. We are all experienced swimmers and we are going to do longer training swims.

“The swim will be an hour each at a time, so it is small chunks, but the difference between the river and the sea is considerable.

“Some of the things that are going to be daunting are the jellyfish and the rough
conditions.”

Tony Baxter, a former staff sergeant in the military, has been a member of the club since 2016, even though he lives in Hemel Hempstead.

Henley was the nearest option at the time and — before the coronavirus pandemic — he would commute as much as six days a week to swim with his clubmates.

He said: “I found out about Henley through word of mouth and it is just an amazing club. It has taken over my life.

“I was very inexperienced and technically atrocious but I’ve had lots of lessons now and I’m much more capable.”

Mr Baxter, who is a facilities manager for Wincanton, a logicstics company, has done the Thames Marathon, and the Jubilee River Swim and was part of a six-person relay tea,m that swam the Channel in 2019, helping to raise £5,000 for the children’s intensive care unit of St Mary’s Hospital in Paddington.

He has suffered from anxiety since 2018, which he puts down to a combination of factors.

Mr Baxter said: “I was in the military for 22 years and had no issues when I left in 2012 but out of the blue I started having some medium level attacks.

“Before that, I would never have thought that sort of thing would affect me because of who I am and what I’m capable of doing, so it has been a lesson.”

He is confident the Rats will finish the swim.

Mr Baxter said: “I know it hasn’t been done by a team in skins before but with the team we have and how well I know them — barring injury or extreme conditions — I know we will be successful.”