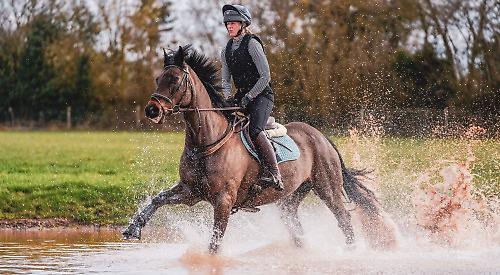 AN equestrian centre which recently opened near Woodcote is caught up in another planning battle.

Diana Rhodes set up Chiltern Cross Country on an 11-hectare field off Oxford Road, between the village and the A4074, after being granted planning permission in February last year.

The eventing course consists of about 80 moveable timber jumps with a permanent water obstacle designed to resemble a pond and a car park with associated offices.

South Oxfordshire District Council gave consent despite opposition from Woodcote Parish Council and nine neighbours who were concerned about the impact on the Chilterns Area of Outstanding Natural Beauty.

But now the council says Ms Rhodes must move the entrance by about 1m because its current location means visibility for drivers coming and going is poor.

It has also ordered her to flatten a small earth mound which she built without permission but assumed neighbours wouldn’t mind because it screens her car park from their view.

She is disputing the entrance issue, saying the plans were changed three times until planning officers were satisfied.

Ms Rhodes, 57, who owns the land with her partner Guy Hildred, said: “We’re very upset because we’ve done things by the book and lots of other people install temporary cross-country courses without permission as they don’t need it.

“We needed consent for the car park and water jump, which are immovable features, but now we feel like we’re being unfairly penalised for doing the right thing.”

The course stands on land which used to host the Woodcote Rally, an annual steam and vintage vehicle fair.

Ms Rhodes, a lifelong rider, came up with the idea about two years ago after getting into eventing as part of a “bucket list” of things she wished to accomplish in her fifties.

She was inspired by a fellow enthusiast who remarked that there were few facilities in South Oxfordshire so people had to drive long distances to train. Ms Rhodes believed she could succeed as she worked in equestrian public relations for many years and previously ran a campaign to inspire more people to take up the sport.

She chose the site out of several which she and Mr Hildred own because it drains well and doesn’t readily become boggy.

She hired Adrian Ditcham, who designed the London 2012 Olympic eventing course, to bring her vision to life.

He would probably have been too busy but several of his other projects had fallen through as a result of the coronavirus pandemic.

The outbreak delayed her plans to open last summer but she and Mr Ditcham dug out the water jump and installed steps anyway, then built the remaining jumps off-site and put them up last month.

The obstacles range from 60cm in height, which is more suitable for ponies, to 1m for more skilled riders and are built to British Eventing standards.

The course is only used between February and October and is open from 8am to 8pm on weekdays and 8am to 5pm at weekends.

Users book slots by the hour in advance and should leave within an hour of finishing.

Only 11 vehicles typically visit daily with a maximum of eight horses on the course at any time. There are no “walk-in” admissions.

The council’s enforcement officers visited the centre to issue a notice as the first customers were trying the course only a days after outdoor sports were allowed to resume under the covid rules.

Ms Rhodes, who lives nearby, said: “We’ve had to fight for this at every step even though it’s supported by local riding clubs.

“This isn’t some large-scale formal undertaking with lights and loudspeakers — it’s just mobile jumps in a field for children and adults to exercise their horses.

“We understand that people don’t like change but this is all very upsetting. We’ve faced unfounded accusations that we want to build houses on the land or put up massive floodlights, which is quite ridiculous.

“These problems aren’t insurmountable but we’ve already moved the entrance three times and also set our electric gates back from the road. We’ve literally thought of everything to make it safe and fit in with its surroundings.”

Ms Rhodes said feedback from customers so far had been positive.

She said: “Many people have commented that, in addition to the actual jumps, it’s great to have so much space to really ‘open up’ their horses and have them cantering at different speeds.

“A lot of event trainers have booked it for sessions with their clients and they say it has saved them a lot of mileage. Some people have even suggested a shuttle bus to Checkendon Equestrian Centre, which I think is a lovely idea.

“There’s a lot of support and enthusiasm because riding is a fundamentally rural pursuit.

“This field lies in an Area of Outstanding Natural Beauty and what could be more in keeping than horses jumping over beautifully made fences? It’s not as if we’ve got coloured jumping posts, surfacing or lighting.

“I know these initial difficulties will eventually be in the past but as anyone running a business can tell you, getting a venture off the ground involves clearing a lot of hurdles and many people would have given up before I have.”

The Hildred Partnership, which sought permission on Ms Rhodes’ behalf, said the scheme would provide a “sustainable” income to complement its agricultural business as farmers face major financial problems due to Brexit.

It would provide work opportunities for seasonal staff who would otherwise only work for a limited number of months.