Girl, 11, to the rescue after jackdaws get stuck in classroom chimney 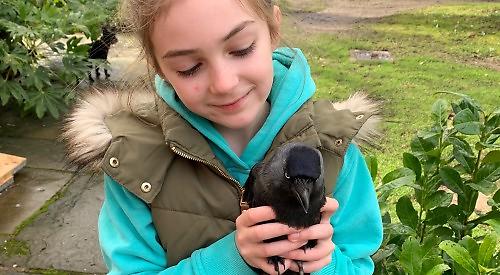 A GIRL rescued a pair of jackdaws that were stuck in a chimney at her school.

Zosia Ciepielska, 11, is passionate about helping injured wild animals and over the years has rescued rabbits, pigeons and bats.

So she was the ideal person to call on when the two birds became trapped in the chimney at Lewknor Primary School.

Headteacher Deborah Cole said: “We have been having some problems with a family of jackdaws that have set up home in the chimney of the upper juniors class. For some reason, they keep falling down the chimney flue.

“Miss Lawes, Zosia’s teacher, and I have come to school some days to find a jackdaw flying round the classroom.

“Once the blinds have been pulled down and the doors opened, the jackdaws are able to make an escape and fly out.

“However, a few days ago we discovered one jackdaw had become stuck in the flue and we thought. ‘How are we going to get this poor bird out? And that is when Zosia came to the rescue.” The girl put her hand up the chimney and pulled the bird out and found it was still alive but terrified.

Mrs Cole said: “Zosia placed it in a tea towel and took it to a quiet place in the churchyard to release it. But then we discovered bird number two had also come down the flue and was sitting on a cushion by the fireplace.

“Again, Zosia wrapped the bird up snuggly and released it in the school garden.

“I knew she would be able to do it — she is very brave. I’m thankful that she saved the birds and her class.”

Zosia, who lives in the village with her parents, Barbara and Marcan, and 16-year-old sister, Jagod, said she once rescued a gosling.

She recalled: “My dad was driving to work and saw it in the middle of the road and there were red kites circling it.

“There were no other goslings around, nor his mum, so dad took it home to us and we took care of it.”

The family fed the bird boiled eggs, oatmeal and rice.

Zosia said it became part of the family and liked to sleep on her mother’s slippers.

“It was really fond of us,” she said. “I think it thought we were its family. It also got on well with our dog, cat, two hamsters and two frogs.”

After three weeks, the family took the gosling to a nearby pond and released it.

Zosia said: “It was a bit scared at the beginning and didn’t want to swim but it saw a family of geese and started swimming with them, so it was a happy ending.”

She also recalled rescuing a bat after one of her friends called her to say she had found it in her house and didn’t know what to do.

Zosia said: “It was as small as a £1 coin. We gave it milk and put it in a box with a blanket. It fell asleep during the day and eventually we set it free.”

She said she would love to become a vet when she grows up, adding: “I love all the animals and I feel that all of them deserve to live.

“With the baby gosling, we really wanted to keep it but I knew the right thing to do was to set it free.

“With injured animals, the best thing to do is take them to the experts who know how to help them.”

Mrs Ciepielska, 42, who is a teaching assistant at the school, said: “All her friends know that she is like that and always call her to the rescue.

“She is always reading up about animals and how to take care of them in books or on internet forums.

“I am really proud of Zosia and I hope she will become a vet just like she wants.”