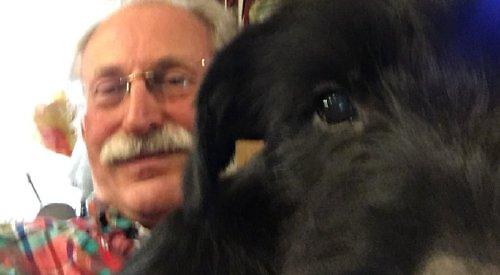 A MAN whose dog was shot dead by a farmer has warned other owners to be extra careful with their pets.

Mark Foster’s giant schnauzer Freja was killed at Kingswood Farm on Easter Monday after she ran into a field with livestock.

Farmer David Hicks said he had to shoot the dog as she was attacking his sheep.

Mr Foster, 66, was celebrating his birthday and the first day of retirement when he took his three dogs for a walk.

He was on a public footpath near the farm in Wyfold Lane, Peppard, with a friend, Jackie Arnold.

There are notices on either side of the path stating: “Keep dogs under control, livestock in field”.

Mr Foster was putting leads on his dogs when 15-month-old Freja suddenly escaped, squeezed under the gate and ran into the field.

He said he heard a shot less than a minute later followed by a yelp and when he ran into the field he found his dog was dead.

Mr Foster, a retired telecommunications manager from Kidlington, said: “My mother lives in Chiltern Lane in Peppard and I go and visit her every weekend and her close friend Jackie and I take our dogs for a walk together.

“We parked up in Lime Avenue and we got the dogs together after mapping out our walk on an app, which allows us to use the footpaths around the edge of the field. It was the first time we’d used this route.

“As we were walking through the woods with the dogs off the lead, I saw the gate and a white sign which said, ‘Keep dogs under control’.”

Mr Foster was walking Freja and his two others dogs, Bramble, four, a springer spaniel, and Purdy, 11, a cocker spaniel, at the time. Ms Arnold was walking her mixed-breed dog Mabel.

He said: “I put the spaniels on the lead first as I thought they are smaller and would be able to slide under the gate better than Freja but she had managed to squeeze underneath and ran off to the left of the field.

“Jackie’s dog ran after her into the middle of the field but she came back quickly for a treat.

“I was making sure that Mabel came back safely and we were in the corner of the field when I heard the shot to the left followed by a yelp.

“I handed the leads to Jackie and ran towards Freja — I saw her lying down still and I didn’t know if she was dead. I got down by her and I saw a huge hole in the back of her right rear cheek.

“She was warm and her eyes were open so I thought maybe she was still alive so I said to the farmer, ‘Shoot her in the head to put her out of her misery’ but he said he couldn’t shoot her as the ball bearing he was using would have blown her head to bits.

“He called to his wife to get a 410 but when I checked again, she was already dead.

“I was so emotional I just wanted to get away — I was just numb really. I wasn’t angry or shouting and it wasn’t until I spoke to my sister-in-law that I cried.”

Mr Foster drove his vehicle into the farm to pick the dog up as she was too heavy to carry.

He said: “The farmer said she’d had a sheep cornered and it was on its back but there were no sheep around. He said he had seen this happen more with covid and people walking their dogs more and he was losing lots of sheep so I thought he had a right to shoot her.

“But on the way home I was thinking about it more and more and Freja was only in the field for about 50 seconds. I saw no sheep there and there was no blood in Freja’s mouth so I think he just shot her as she was heading towards the sheep. I think that it should have been more of a last resort.

“He also didn’t ask for my details or for any compensation for any damaged sheep.”

Mr Foster reported the incident to the police who told him it would need to be dealt with as a civil case.

He said: “I’m tempted to go back and put signs up warning people their dogs will be shot. There’s nothing I can do for Freja but there will be more dogs killed if they aren’t warned.”

Mr Foster had bought Freja only a few months before his wife, Suzanne, 60, died of cancer in April last year. They had owned a giant schnauzer previously.

He said: “Suzanne said we should get another schnauzer and I was like, ‘I don’t know, I’m a bit old now’ but we found Freja and Suzanne was struck with her.”

Mr Hicks said the dog had cornered a sheep and was “biting at it”. He said: “The law allows farmers, as a last resort, to shoot dogs chasing and attacking sheep, poultry, cattle and even horses.

“The Protection of Livestock Act 1953 states we are allowed to shoot dogs if they worry livestock, which means attacking, chasing or being at large in a field with sheep. We’ve had weekly occurrences of dog attacks at this farm and on other land we rent in the area.”

Mr Hicks said this was the only incident where a dog had had to be shot since 2017 when a dog had killed three of his ewes that were carrying lambs and he had reported this incident to the police.

He added: “There are two signs on the footpath, one at each end, warning dog owners to keep their dogs under control, which were provided by the council.

“They are adequate and I’m not fencing it off as sheep would lose grazing area but it’s a public footpath and I can’t stop people going through.”