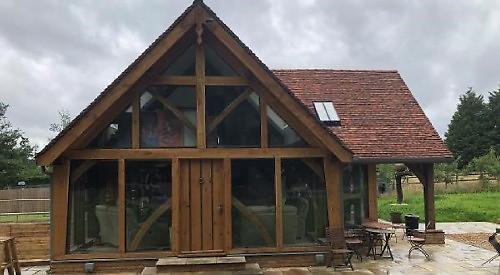 AN artist is appealing against an order to tear down an “unlawful” studio he built in the countryside.

Clive Hemsley says the three-storey building in a field near Rotherfield Greys is not much bigger than the one he had previously proposed and which was approved by South Oxfordshire District Council, the planning authority, in 2017.

Mr Hemsley. from Henley, also says council officers regularly inspected the site at Greys Meadow but did not say anything was wrong until after the studio was finished.

They then told him to apply for retrospective permission, which he did last year but the application was rejected.

Officers said the building had an “urbanising” effect on the Chilterns Area of Outstanding Natural Beauty and raised concerns about vehicle access.

They also said the property was much larger and better equipped than the approved scheme and that it resembled “a substantial detached dwelling” that Mr Hemsley could use as a house.

The council issued an enforcement notice saying the “unauthorised development” was “tantamount to the creation of a residential dwelling in an unsustainable countryside location” and “harmful to the landscape”.

In his appeal, which will be considered by an inspector, Mr Hemsley claims that the notice is invalid because it doesn’t offer an option to revert to the approved plans nor specify which aspects of the building are unlawful.

He says he only deviated from the blueprint when it became necessary during construction and he gave the council regular reports, including photographs.

Mr Hemsley, whose home in Hart Street is on the market, denies he has any intention to live at the studio. The issue dates back to 2016, when Mr Hemsley was granted permission to convert an existing stable on his land into an art studio with stores.

It comprises a lower-ground floor studio, which opens on to a sunken patio and tiered garden, and galleries on the two upper floors with a kitchen and three toilets.

As well as the building, the council was unhappy about an earth mound from excavations, which Mr Hemsley has since flattened, an additional storage building which he says was authorised in 2017 and a series of outdoor sculptures.

Officers accused him of “disregard for the planning process”.

In his appeal, Mr Hemsley says the site was inspected monthly and no concerns were raised.

He says a bigger porch was needed to shelter visitors using the “very wide” doorway, the larger basement doesn’t affect public views and the deep foundations were needed due to “difficult” ground conditions.

An outside entrance to the lower floor was “critical” while foundations were being installed and it “made sense” to keep it to improve disabled access.

The building was moved slightly to improve natural light, which was of vital importance to an artist.

Mr Hemsley says the building is environmentally friendly with heavy insulation and a low-energy heat pump which uses warmth from the ground and air.

The appeal document says: “Variations from the approved drawings weren’t concealed from council staff. Indeed, the appellant happily discussed amendments with planning and enforcement officers whenever they were on site.

“Officers didn’t challenge what was happening until construction was completed. Either they accepted the revised siting and design did not require amendment or didn’t carry out due diligence and were unaware that it wasn’t in accordance with the approved plans.

“If they didn’t query this, the variations must be so small that they were not apparent on close inspection so wouldn’t be apparent at all when viewed from public viewpoints or neighbouring land.”

The document claims that later feedback from the council was “a deliberate and unhelpful attempt to justify refusal, regardless of the planning merits”.

It continues: “The planning officer reiterated concerns about possible future uses and intended to refuse permission regardless of what Mr Hemsley said.

“It is the appellant’s case that this has been refused with the intention of causing maximum harm to him and his dream of using the land for an art studio.

“The council has already found on three occasions that a studio was not contrary to policy.

“The only issue was whether the revised design was still appropriate but the council failed to determine the application on that basis.

“Mr Hemsley apologises that the building is slightly larger and in a slightly different position from the approved drawings but, for the above reasons, he hopes the inspector will show leniency.”