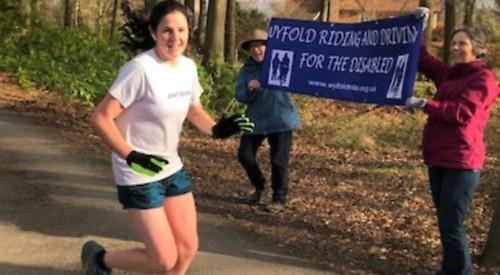 A TEENAGER from Stoke Row raised more than £1,500 for Wyfold Riding for the Disabled by running two marathons in 48 hours.

Nicola Lee, 17, ran 52.5 miles over the Easter weekend to help the charity recover from a loss of income caused by the coronavirus pandemic.

The charity, which provides horse riding facilities for disabled people from South Oxfordshire and Reading, has lost about £2,500 per month over the past year.

Nicola is the daughter of its chairwoman, Diane Lee, and has been helping groom the horses and muck out the fields since she was 11 years old.

She said: “I’ve helped out there quite a lot whenever my mum has needed me and when covid hit they couldn’t raise as much money.

“I got in touch with my school, Leighton Park School in Reading, as they have a fundraiser each term for a charity and they did a non-school uniform day which raised about £650.

“When that was going on I thought, ‘I want to challenge myself and have something to focus on’ and came up with the idea to run.”

Nicola, who has been cross-country running since was five, decided to run four-and-a-half miles every two hours with the aim of raising £500.

She said: “I always had someone cycling or running alongside me so it was nice to not be alone but my body hurt. I started at 6am on the Friday morning and by Saturday night I couldn’t imagine being able to finish it.

“I had an evening planned with my friend with pizzas and relaxing so I was looking forward to that. I was so relieved when it was over and had a real sense of accomplishment.”

The sixth-form student, who lives at home with her mother and father Chris and brother George, 20, said she was delighted to have raised £1,588.

She said: “It’s so nice to see how many people wanted to support us. I think my mum has been a little bit stressed with the lack of money coming into the RDA and horses are an ongoing cost so I was nice for her to have some money and some support from me — I was happy to do it.”

Gill Rushworth, fundraising co-ordinator for Wyfold RDA, said: “What a girl — an amazing challenge for a 17-year-old. I watched her come past the stables on one of her runs and I held the Wyfold banner with our very own marathon runner, Liz Jones, and now we have two of them.

“What an honour for Wyfold — what an inspiring and outstanding feat.”

Wyfold RDA, which is affiliated to the Riding for the Disabled Association, has eight ponies and horses of varying sizes and offers rides for children and adults. It has access to an outdoor arena and parkland. For more information, visit www.wyfoldrda.org.uk