Call for CCTV after cannabis find 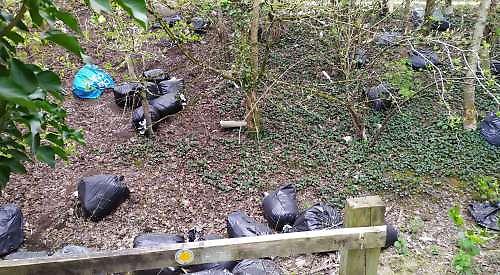 CALLS have been made for CCTV to be installed at fly-tipping hotspots in Playhatch after waste from a suspected cannabis factory was dumped by the roadside.

Thirty bags containing soil and waste from a cannabis grow was found opposite Sonning Quarry, along the Henley to Reading Road (A4155).

He said this area is plagued by fly-tippers who dump rubbish because they can’t afford to dispose of it properly.

Councillor Woodward said: “I do have some sympathy in a way with tradesmen, who face very high charges for taking stuff to the tip.

“I appreciate it’s a burden, but it’s just not neighbourly behaviour. It very often gets dumped around here and it costs a lot of money to move it. It is a great shame and it seems to be a convenient spot for dumping.”

He said Tarmac, which runs the quarry, had considered installing cameras on its land to deter offenders.

Councillor David Bartholomew, who represents Eye & Dunsden on Oxfordshire County Council, is hoping to help with this problem.

He said: “There has been an ongoing issue with fly-tipping opposite the Sonning Quarry entrance and I’ve been asking for a clean-up there, but I’m also investigating ways to prevent it.

“I’m asking whether there is any possibility of installing CCTV cameras to record offenders. In addition to the fly-tipping, there have also been a couple of illegal raves at that site and that is something we need to stop.

“I’m investigating all possible options to stop it happening in the future. It’s been ongoing for a couple of years. We could potentially look at fencing and other preventative measures.”

Meanwhile, Nick Willson, who runs the Flowing Spring Pub nearby, is also calling for CCTV to tackle fly-tipping along Spring Lane.

He said: “We gets lots of fly-tipping because it is a single-track, one-way road. At night, there is no chance of traffic coming the other way and spotting you.”

During the floods in February a bath tub was left on Spring Lane and a few years ago a shed with an asbestos roof had to be removed from the road by a team wearing protective clothing.

A spokesman for South Oxfordshire District Council said: “Close to this site, officers also found cables that had been stripped of copper and some white goods that had been tipped.

“This type of incident will involve multiple agencies and take some time to clear. We are now investigating this incident and Thames Valley Police is aware.”