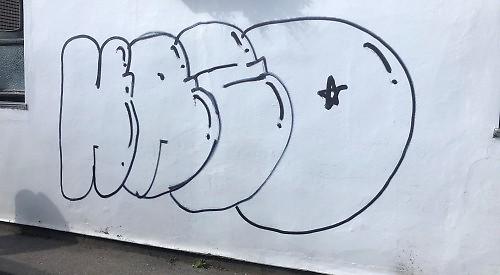 A VANDAL who went on a spree across Henley has been branded “pathetic”.

Town councillor Donna Crook was speaking after street furniture and shop windows were all daubed with graffiti.

A wall of the Henley 60+ Social Club, where older residents meet up, was also spray painted.

They were drawn in various colours including red, silver, black and blue and included the nickname “Kazo” as well as insults directed at others who had left tags previously.

Cllr Crook has been out since then scrubbing off the graffiti from bus stops in Hart Street and Reading Road, noticeboards and planters in Market Place and off Greys Road and from the telephone cable cabinet in Station Road.

She used nail polish remover, which contains acetone to dissolve ink and paint, as well as a window cleaning spray and wore a face mask and protective gloves while she worked.

Cllr Crook said: “It’s unsightly, annoying and a waste of everyone’s time but I thought someone had better remove it because if it’s just left there, people assume they’ll get away with it so it attracts even more. It’s pretty pathetic. It gives a terrible impression of Henley, especially as we’re slowly opening up again, so I didn’t mind stepping in as somebody had to.”

The vandal targeted several businesses including Higgs Group, publishers of the Henley Standard, in Station Road, and an empty unit a few doors down which was previously occupied by the Island Massage salon.

Courtiers paid a painter and decorator to redecorate its premises as well as the social club in Greys Road car park at no cost to them.

Leo Hallam, the firm's head of brand and communications, said: “I live in the town and was horrified when I saw it on the gate.

“I’d already spotted graffiti on the 60+ social club when I was walking into work so the obvious thing to do was to sort it all out as quickly as possible.

“Whoever did this clearly favours exposure and has no consideration for what other people feel but it isn’t fair to leave others to deal with it. It’s not what Henley is about and isn’t what the town should look like.

“It’s a beautiful place that attracts tourists from all over the world and I'm sure anyone who cares about the town would have wanted to help.”

Gill Dodds, chairwoman of the club, said: “It’s mindless behaviour and I don’t know why these kids do it.

“It was very kind of Courtiers to help out and I’ve already written an email thanking them for such a generous, community-spirited gesture.

“I hope whoever’s responsible is caught. I’m sure it’s bored young kids but they don’t understand how much upset they’ve caused, nor the seriousness of what they’re up to, and someone needs to make them see that.”

Henley Mayor Ken Arlett said that when he was Mayor in the early Nineties, vandals were charged if they were caught by police.

He said: “We’ve always had a policy of removing graffiti quickly because otherwise it just breeds more graffiti. Our parks services team often respond when they need to.

“The young people who do this are just small-minded and don’t realise the damage they’re causing.

“Someone needs to go before the magistrates so that others think twice about doing the same thing, and possibly be made to clean graffiti up themselves. That should at least stop the problem for a while.”