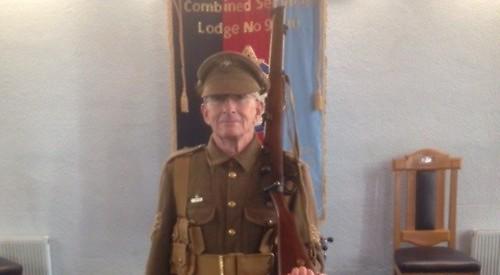 A MAN from Maidensgrove is attempting to walk 100km while wearing a replica First World War army uniform to raise money for the Royal British Legion.

John Green, 85, who is chairman of the Henley and Peppard branch of the charity, hopes to walk 20 miles each day between today and Monday.

He will be wearing a Sherwood Foresters replica uniform and carrying a deactivated rifle.

This was set up to honour Captain Sir Tom Moore, who raised more than
£38 million for the NHS by walking 100 lengths of his garden during the coronavirus pandemic. He died in February, aged 100.

Mr Green said: “The family of the late Captain Sir Tom Moore is inviting the world to take inspiration from his famous 100 lengths of his garden to celebrate his life, his generosity of spirit and the hope and joy he brought to millions of people.

“Every charity has struggled due to covid, so many have suffered from loss of income and this is one way of raising funds to help them.

“The need for these charities is just as strong as before and this is why I feel it’s so important to take on this challenge.

“Like many people, I have been inspired by Captain Sir Tom and the way his motto, ‘Tomorrow is a better day’, has resonated with so many of us in this time of covid restrictions.

“Although we will never match his strength and character, all we can do is try. He was an amazing man and inspired a lot of people.”

Mr Green, whose father served with the Sherwood Foresters during the Great War, will walk 25km each day from his home to Checkendon, stopping in Ipsden for refreshments.

He has already raised more than £260. To donate, visit https://uk.virginmoneygiving.com/JohnGreen78

She will row 30km from Goring to Henley, swim 50 lengths of a 25m pool and walk 20km over four days.

Ms Kozniewska, from Henley, said: “Captain Sir Tom Moore was a big inspiration. He remained so optimistic and made me feel much more positive about being able to overcome bad times.

“There are so many charities that need support right now but I’ve supported the Poppy Appeal since I was a teenager and the Royal British Legion is really close to my heart, so it feels right to raise money for them.

“I’ve not swum for a very long time but I’m hoping to get in the pool as soon as possible and I look forward to the challenge.

“I’m hoping to do some walking with John and keep him company for some of the way.”