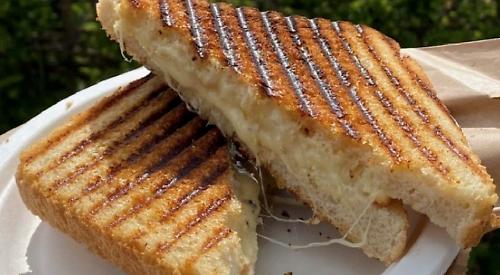 THE Nettlebed Creamery has welcomed a host of famous faces since opening a cheese toastie kiosk last month.

Hollywood actor Tom Hanks paid a visit on March 6 — a day after the Cheese Shed opened to the public — while celebrity cook Mary Berry and actor Jeremy Irons, who both live in the Henley area, have also stopped by. 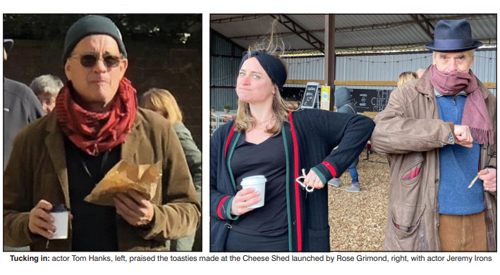 The Cheese Shed is a converted shipping container used to sell toasties, coffee, cakes and smoothies, with ingredients from the creamery or local suppliers. It is open from 8.30am to 3pm on weekdays, except Monday, and from 9am to 3pm at weekends.

Founder Rose Grimond said the shed was one of many ways the business has adapated during the coronavirus pandemic.

She said: “It was a huge surprise to see Tom [Hanks]. He was doing some work in the area and we weren’t expecting it at all. He hugely enjoyed the food and was extremely complimentary about the toasties.

“Mary and Jeremy have both been wonderful champions of local business. She came up recently with her family and Jeremy has been twice.”

Berry, who was a judge on the Great British Bake Off, tried traditional cheese-making at the creamery when she co-hosted a special edition of Countryfile last year. The episode also included English Farm, near Nuffield, and Bosley Patch, a market garden off Marlow Road, Henley.

Mrs Grimond said: “Mary has been a wonderful supporter to us and other local businesses. She did a wonderful job with Countryfile in August when she highlighted the importance of buying locally.

“We value all our customers and we have had nothing but the most wonderful support from everyone.”

As coronavirus restrictions continue to ease, customers have been able to enjoy the toasties in a converted Dutch barn on the site.

The business gave away 350 cheese toasties free in December on a first-come-first-served basis to thank the community for its support during the pandemic and as a preview of what to expect when the shed arrived.

The sandwiches were produced using award-winning Highmoor and Witheridge cheeses, while the bread came from Lawlors the Bakers in Henley.

While the business has been able to steer clear of danger during the last 12 months, Mrs Grimond has made helping the community a priority.

In June, during the first lockdown, the creamery introduced a milk float service, inviting people to nominate friends or neighbours who were deserving of free milk.

The float also provided a service to residents who were shielding and this was only stopped when supplies at supermarkets returned to normal.

Mrs Grimond said: “We were determined to help people and milk is such a staple but a lot of people were unable to get it. The roads were empty and we got out and delivered to as many people as we could.

“The pandemic has forced us to diversify further so we chose to focus locally. This has opened up ideas that support our local community, which is both exciting and rewarding. When I saw what the key workers were doing, it made me think ‘what can I do to help’ and I think everyone felt the same.

“An advantage of being a small business is how quickly you can adapt. It has been a hugely challenging time for everyone, but it has been an opportunity to see what we can do to support our community and pay back to them.

“We’ve been overwhelmed by the feedback for the Cheese Shed. The customers are from all walks of life but everyone loves melted cheese.”

The creamery also has a partnership with HMP Huntercombe in Nuffield, offering employment to reduce the
re-offending rate.

Mrs Grimond used to work in the criminal justice system in London and has been working with the prison on the scheme since opening the creamery in 2015.

She said it could have a “significant” impact on their rehabilitation, adding: “One individual we had was astounding, hugely hard-working, and helped us refine our processes within the production area with lots of useful suggestions.

“All the applicants are risk- assessed before we decide to take them on and they have proved to be wonderful additions to the team.”