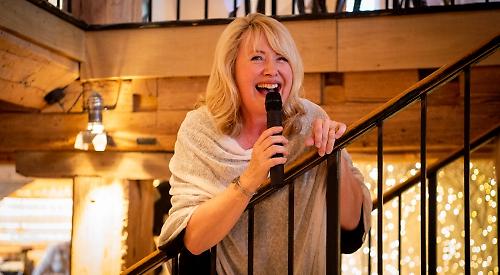 THE Mill at Sonning wants to convert a building used for rehearsals and accommodation into two homes to help it recover from the coronavirus pandemic.

The theatre, which is due to re-open on May 17, was granted planning permission to convert the two upper floors of the former watermill into flats in 2017.

It was also given consent to turn the two-storey building, which is separate from the main building, into homes but the conversion was never completed.

Now the Mill has applied to South Oxfordshire District Council, the planning authority, for permission to convert it into two three-bedroom homes.

The theatre says income from renting out these properties would be crucial to the survival of the business.

Sally Hughes, managing and artistic director, said: “We put this in a few years ago and got permission but we found rare bats up in the roof.

“It has taken us years to get this far and we had to start work on other elements last year before the permission expired. Each stage has been difficult.

“This will enable us to preserve the heritage of the buildings and ensure they are refurbished and well looked after, while at the same time using the money to help us through tough times.

“ Not all people understand how expensive it is to run a theatre. They might see the Mill as successful but it is a lifestyle business and not a big money maker with lots of profit.

“It has always been difficult but the last year has been nearly impossible.

“We’ve been helped by people who have donated and moved over tickets and we’re incredibly grateful for their support.”

The detached building, which is south-west of the theatre, is currently used to provide overnight accommodation for staff and performers and has a lounge, dining room, kitchens and rehearsal room.

A design statement by OSG Architecture says: “The pandemic caused the theatre to close its doors in March 2020, just as the business was beginning to generate reasonable profits. The business is in dire straits and has been on the verge of closing completely.

“There is light at the end of the tunnel with the end of lockdown in sight, enabling fundraising to begin and new productions to be prepared.

“The case for this proposal has not altered since the previous application and the principal objective of the proposed development remains to release capital and revenue to invest in the fabric of an important designated heritage asset, maintaining it for this and future generations.

“It is hoped that having previously been granted approval for two dwellings in the same location, the application will be supported.”

If the development is approved, staff and performers would have to be found alternative accommodation in the area and the theatre would ask other venues for rehearsal space.

The replacement of a garage and storage building, which was part of the original application, was completed last year thanks to anonymous donations from Mill Angels, a group of supporters.

The dinner theatre received a grant worth nearly £450,000 from the Government’s Culture Recovery Fund. This will be used to help the venue to operate with a 50 per cent reduced capacity and reassure visitors who may be nervous about returning.

The Mill, which is Grade II listed, will improve its ventilation and air conditioning systems. It will have room for only 70 customers for dinner and a show due to social distancing requirements.

The former water mill building dates back to the 18th century and was owned by the Witherington family, who added the top two storeys and the larger waterwheels.

The Phillimore family took over the mill in 1913, still trading under the name C H Witherington and Sons, before it was taken over by Associated British Foods in 1962.

The mill closed in 1969 and remained empty until 1977 and was brought back to life by Tim and Eileen Richards. The conversion took four years to complete and the dinner theatre opened in July 1982.

A four-week public consultation will run until May 15 and the district council is due to make a decision by June 2.