‘Feeding red kites could lead them to their deaths’ 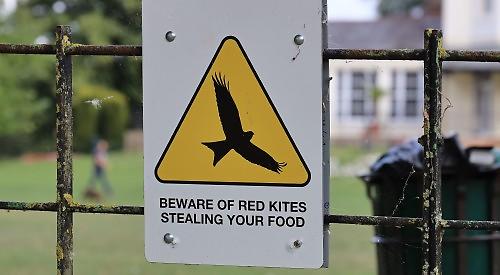 A WOMAN has appealed to residents of Benson to stop feeding red kites.

Jennie Hempleman says that people’s good intentions could backfire with the birds being killed.

Mrs Hempleman, who lives in the village, wrote to the parish council expressing her concerns after noticing the birds were becoming more aggressive and swooping down to grab people’s food as they were eating outdoors.

She said: “They’re quite menacing as they circle in large numbers over gardens and are clearly looking for an opportunity to steal food.

“Recently a five-year-old child had food taken from them and was scratched by the bird in the process.

“I’m worried that someone could be injured by one of these birds as they clearly have very little fear of humans or animals.”

The council said it would issue warnings to the public about the different dangers of feeding the red kites, including:

• Scraps of cooked or uncooked meat left lying around or dropped by birds were an environmental health risk.

• Large numbers of red kites attracted by the food might discourage songbirds and other wildlife.

• More people could be injured by birds swooping down to grab food.

The council also said the birds themselves could be put in danger as they could interfere with the operations at RAF Benson.

Large numbers of kites mean there is a higher risk of collision between the birds and aircraft from the base.

In 2014, Natural England issued a licence to the base to allow it to shoot red kites on the airfield if there was a risk they could collide with an aircraft and there was no other way of avoiding it.

A council meeting last week heard that the problem had to be resolved as soon as possible.

Councillor Phillip Murray said: “It’s a really serious problem — people need to understand that if they keep feeding them, they are not supporting them but putting them in danger.”

Councillor Tom Stevenson said: “What we want to ask residents is: do you really want to be the reason for these birds to be killed?

“We need to be very clear about the fact that if we keep feeding them, they are going to be killed.” Councillor Rebecca Timms said: “I’m a fan of red kites and I don’t want to see them killed.

“It would be great to make the public aware of what they are about as people often don’t know much about these birds.”

Neil Jackson, conservation and landscape officer at the Chilterns Conservation Board, said the board received a lot of enquiries regarding red kites during the coronavirus lockdowns and the problems seemed to be more serious in Benson than other areas.

He said: “The problem at Benson is not a new one. In 2014, the RAF was issued with a licence to cull birds as numbers posed a risk to aircraft. I don’t think they ever used the licence though.

“While the reintroduction of red kites to the Chilterns in the Nineties has been a success on so many levels, the concentration of numbers as a result of feeding undoubtedly tarnishes their reputation. They are beautiful birds and quite dramatic when you see them flying,

“When future reintroduction programmes are considered, I think lessons need to be learned from such unintended consequences.”

The board discourages the feeding of red kites as there is plenty of naturally available food for them in the countryside.

Feeding them can also encourage the birds to become dependent on scraps which don’t give them all the nutrients they need.

If left to feed naturally they will disperse over a wider area rather than congregating in large numbers over towns or villages.

Mr Jackson said: “We are really concerned about the problem and discourage people from feeding them. They get too familiar with human beings and we increasingly hear about them taking food from barbecues or stealing people’s sandwiches.

“They became extinct in this area because they were a public nuisance and we don’t want that to happen again so people should stop feeding them.”

RAF Benson said there had been a number of incidents at the base involving red kites but none had been killed.

A spokeswoman said: “As far as I’m aware, we’ve not had to use our licence to cull any red kites so far.

“However, as always, we would discourage people from feeding them, particularly if they live in close proximity to the airfield, as the birds can be an air safety risk.”