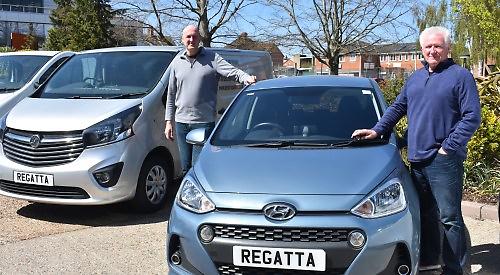 A NEW car and van hire business has opened in Henley.

Friends Mark Shankland and Peter Lucas came up with the idea for Regatta Car and Van Hire during the first coronavirus lockdown in March last year after realising the nearest place to hire a van was more than 10 miles away.

They have two vans and four cars available to hire from their base in Newtown Road and hope to expand the choice of vehicles.

Mr Shankland, 55, of Valley Road, Henley, said: “There was nobody local and we had to go to the other side of Reading, which involved two people going to pick up the van and one of them driving the other vehicle home, so it seemed logical to us that we should offer something in Henley.

“We decided not to open until January due to the pandemic but we then went into another lockdown so it was a bit challenging in the first month.

“We could stay open but we didn’t have much to do until rentals picked up at the end of March.” Mr Shankland, who used to be a tyre consultant for Thamesview Tyres in the same the road, said they were now busy.

He said: “All the vehilces are out five days a week.

“As more people are working from home now, they are getting rid of one of their cars and then renting instead when they are having a weekend away, for example.

“One customer rented from us for a month because he didn’t need a car every day so it was cheaper for him. Also people are downsizing or getting rid of rubbish so they need a van for moving. The pandemic has helped in that way.”

Mr Lucas, 68, who lives in West Street, Henley, and used to run a Porsche dealership, said: “In this difficult period of time we’ve taken a risk and invested our money as we’re confident. We’re really glad we did it.

“We know that Henley likes to take the opportunity to support local businesses.”