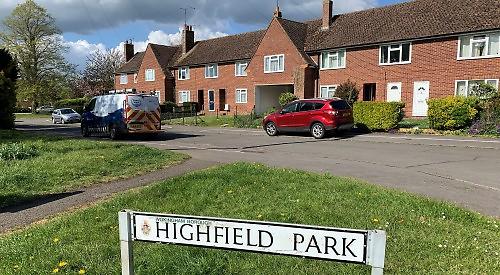 HELICOPTERS circled above Wargrave as armed police searched for a man who was on the loose with a weapon.

Officers received reports of a disturbance at a property in Highfield Park shortly after midnight on bank holiday Monday.

Residents first became aware of the helicopters at about 6am and the manhunt continued for the next six hours.

Officers used dogs to carry out searches in the gardens of houses throughout the morning.

The search ended around noon following the arrest of a 40-year-old man on suspicion of making threats to kill, using threatening violence and possession of a bladed article in public.

The Bracknell man has been released on police bail until May 30.

Teacher Chez Annetts went to see her father Tony, who lives in Highfield Park, as she was concerned.

She said: “There are lots of elderly residents in that street and they were rightly concerned.

“The first I knew about it was at 6am when I heard the sound of the police helicopter. It was circling above the recreation ground.

“There were armed police officers holding guns and dog handlers searching the gardens. It was a long saga.”

Parish councillor Graham Howe, who lives in Braybrooke Gardens, said: “The helicopter started at about 6am and someone posted on Facebook that a man was led away in handcuffs.

“The helicopter was circling well into the morning, so whatever happened it went on for some time.”

Residents of Highfield Park spoke of their shock at seeing such a large police presence in the village.

One said: “It was when I heard the helicopters that I realised something wasn’t right and thought, ‘What the hell is going on?’

“If the police are here then you know it must be serious. It was a bit scary to see about 12 armed police officers with massive guns.

“The police dogs were going into the gardens but before that the police officers were looking in the gardens themselves with torches.

“You don’t usually see anything like that in Wargrave. It’s quiet around here and the worst we get is a bit of graffiti.

“I’ve lived here all my life and just the thought that someone could be out there with a weapon is frightening. There are lots of families with young children around here.”

Another resident said: “The police asked me to go back inside for safety purposes because they said there was a dangerous man on the loose.

“It was dealt with very professionally and the police did a very good job at stopping people from coming down the road. They were searching the gardens and the alleyways.”

Thames Valley Police said officers attended Highfield Park, Wargrave, at about 12.10am after a report of a disturbance involving a man with a weapon.

In a statment, the force said: “A 40-year-old man from Bracknell has been arrested on suspicion of threats to kill, threatening violence and possession of a bladed article in public in connection with this incident. He has been released on police bail until 30 May.

“No one sustained any injuries.”