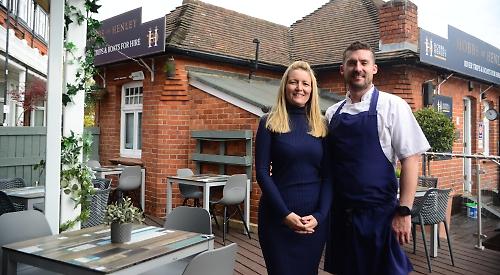 THE owners of a riverside restaurant in Henley want to be able to serve food to customers outside.

Shaun and Gemma Dickens, who own Bistro at the Boathouse in Station Road, are already permitted to serve drinks on the decking between 6pm and 9pm.

Now they want to serve food between those times as well, saying this would attract customers and help them recover from the effects of the coronavirus pandemic.

But residents of neighbouring Boathouse Reach have objected, saying they would be affected by the additional noise.

In a planning application, Mr Dickens says: “We have been in business for eight years and believe we have been good neighbours and incredibly respectful.

“Covid has devastated our business and left us fighting for our future. As the opening date draws closer, we now look to build a secure and stable future for the business.

Mrs Dickens said: “We have never been able to serve food on the decking area in the evenings but our customers constantly ask for it. We have the best spot on the river and people want to be able to enjoy food with their drinks, especially in the summer months.

“Outdoor dining is becoming the new normal and we want to be part of that otherwise we are not going to thrive as a business.

“With the restrictions, customers feel more comfortable dining outside. I think they are a bit nervous and eager to be outside in the nice weather.

“We are very much weather-dependent and usually can only use the decking area for five months a year because of the weather.

“We already have permission to serve drinks and serving food will not cause any additional noise.”

Speaking at a meeting of the planning committee, Councillor Will Hamilton said: “We need to do anything we can to support this business during such a difficult time.” Councillor Donna Crook raised concern about the additional noise disturbing neighbours.

Councillor Stefan Gawrysiak responded: “They already have permission to serve alcohol and food could have a calming effect. I think what they are asking for is acceptable.”

Barry Reuter, of Boathouse Reach, opposed the application saying that there would be a huge increase of noise.

He said it would not be “practical” to ask diners to return to the main restaurant at 9pm when they may be halfway through their food.

Mr Reuter said: “Next the application will be for dinners on the terrace up until midnight, then the property could be leased to an even noisier business.”

Mrs Dickens said that last orders for food were taken at 8.30pm.

She also said she and her husband had no wish to extend the restaurant’s opening hours.

“We are a family-run business and we have a seven-year-old kid,” she said. “We don’t want to be working until late at night.”

The bistro has been offering takeaway service during the last lockdown and re-opened for outdoor dining on April 12 when the covid restrictions allowed.

It will fully re-open on May 18 when restaurants will be allowed to serve food indoors again.

Mrs Dickens added: “Lockdown has given us the time to evaluate and think about what is best for our business and develop our menu. We had never done takeaway before but we really enjoyed it and we received a lot of support from residents.

“We don’t take ourselves too seriously, we just had fun with it. Our son Alfie came with us to work and we tried to make it as fun as it could be in such difficult times.

“Now we are just looking forward to a very busy summer, hopefully.”

In 2017, Mr and Mrs Dickens won permission to extend the opening hours of the outdoor terrace and were allowed to use the decked area overlooking the river until 9pm to serve pre-dinner drinks.

Previously they were not allowed to use it after 6pm under the planning permission granted when the former boathouse was first turned into a restaurant in 2008 to prevent residents of Boathouse Reach being disturbed.

Mr Dickens, who had a similar request turned down two years before, claimed the restriction had cost him business.

The district council is due to make a decision by May 27.