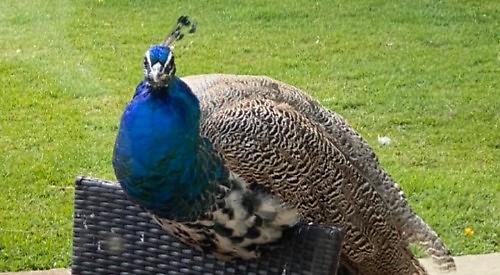 WILD peacocks which prompted noise complaints are to be moved from their home in Woodcote to the Fawley Hill estate.

Some of the 17 or so birds have been ordered off woodland near Beech Lane by South Oxfordshire District Council after it received letters from four neighbours who said their mating cries were keeping them awake.

The decision sparked protest from scores of villagers who said the peacocks had lived in the area for decades and were popular but the authority insisted it had to act.

It was initially unclear where the creatures would go but this week Lady McAlpine, who lives at Fawley Hill, offered to let them join the 40 or so already living on the estate.

They will be taken there as soon as they are caught by a gamekeeper hired by the council, which says the problem is caused by 12 peacocks competing for only five peahens.

The gamekeeper has set up a pen on land owned by Amanda Stewart, who lives in Beech Lane and is often visited by the birds, including two “regulars” which she has nicknamed William and Harry.

The council initially asked her to remove them, wrongly assuming she was the owner.

Mrs Stewart was concerned for the birds’ welfare so she asked for help from Lady McAlpine via Erik D’Arcy-Donnelly, a mutual friend who is a surgeon at Henley Veterinary Surgery.

Mrs Stewart said: “We’re so thankful for Lady McAlpine’s kindness and the whole village will be glad to hear the news. She’s a real hero and we’re very much in her debt.

“I still think it’s ridiculous that the council is doing this when they haven’t done any noise measurements. You have to put up with lots of sounds in the countryside and most people accept that.”

Lady McAlpine said: “Peacocks are wild animals which come and go as they please — they won’t be ‘mine’ but I’m happy for them to come here and see if they’ll settle with the others.

“They’re beautiful creatures to have around — I absolutely love them. Sometimes I’ll look out of the window and see 20 and then other times they won’t be seen for days.

“I’ve never minded the noise they make. A visitor pointed it out the other day but I don’t notice it and don’t see how anyone can complain, it’s not like they do it all the time.”

None of the peacocks had been caught yet. Mrs Stewart and her neighbour Christine Morland tried unsuccessfully to manoeuvre them into the pen using a net.

Mrs Stewart added: “The peacocks clearly aren’t as dim as I thought — they flew up into the trees and simply looked down at us. We will try again another night.”

Mrs Morland, whose father Bob Warren is a gamekeeper in Ewelme, said: “I’m absolutely over the moon that the peacocks will have a new home. People were worried that they might be destroyed so there’s a real sense of relief that it has ended well for them.”

The district council says there was never any intention of culling the birds and has warned against feeding wild peacocks.