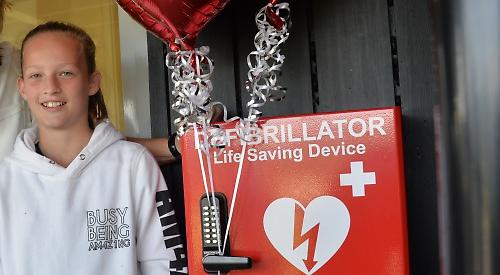 A TEENAGE girl who was treated for a childhood heart condition has been appointed the first female cricket captain in her school’s history.

Millie Roberts, of King’s Road, Henley, is leading the U14 A XI at the Oratory School in Woodcote, where she was among the first girls to join when it became co-educational in September.

The 14-year-old is the only girl in the team and led them to victory in their inaugural match against Shiplake College.

Millie, who also enjoys swimming, hockey, tennis and netball, was seriously ill between the ages of two and eight and underwent numerous surgical investigations at Great Ormond Street Hospital in London.

She was eventually diagnosed with paroxysmal atrial tachycardia, a form of irregular heartbeat for which she took medication, although she no longer needs it. She also has tracheobronchial malacia, a narrowing of the windpipe.

In 2013 her mother Sarah, who is clinical director of the Active VIII physiotherapy centre in West Lane, Henley, launched the Millie’s Dream appeal to install automatic life-saving defibrillators in local schools.

Millie had a heart monitor surgically implanted in her chest in 2014 so there is a risk of damage from being hit by a fast ball but this is considered unlikely.

She cannot take part in endurance sports, such as distance running, but anything involving intermittent bursts is fine.

Her mother said it was a “fantastic honour” for Millie to be made team captain.

She said: “She was nervous about accepting it as she’d been shielding on and off for the past 12 months because of her condition but everyone has been complimentary about her performance.

“The great thing about her first match is that she wasn’t treated differently as a girl but just seen as part of the team. Everyone was respectful of her decisions and it was a truly memorable afternoon

“She has to be careful not to get hit but she’s very stoic and doesn’t let things get in her way. Most of her friends probably don’t know she has a heart monitor, although the school has been exemplary in its support.

“When she was little, I could never have imagined she’d be doing so well but she’s always got on with things and I’m incredibly proud.”

Millie, a seam bowler, got into the sport at Kidmore End Cricket Club in 2018 and was then called up into the Berkshire squad. She also plays for Henley Cricket Club’s women’s side with her mother.

She previously attended the Oratory Preparatory School at Goring Heath, where she played for several sports teams so was delighted when the senior school decided to take girls.

She was the first girl to receive the Oratory’s Pereira scholarship for promising athletes, which was awarded for her cricketing prowess.

Mrs Roberts said: “She’d love to play for England one day and although she knows it’s just a dream, she and the squad’s current captain Heather Knight share a birthday on Boxing Day so perhaps it’s written in the stars.

“However, she’s keeping her options open and is interested in law so has chosen GCSE subjects which would support that path a few years from now.”

Steve Tomlinson, the Oratory’s director of sport, said the team’s first game was “a wholly satisfying performance from a very committed group of pupils”.

He added: “Millie performed well and with excellent support from the team.”

Dr Vicky Fogg, who runs the Wootten, the school’s girls’ house, said: “It was always our intention that our ‘pioneer’ girls would excel, just as our boys do, and Millie’s achievement is a realisation of that aim.

“She is captain because she’s the best person for the job — a talented player who trains hard, plays hard and holds the respect of her teammates and her coach. We couldn’t ask for more.”