Half of town now vaccinated 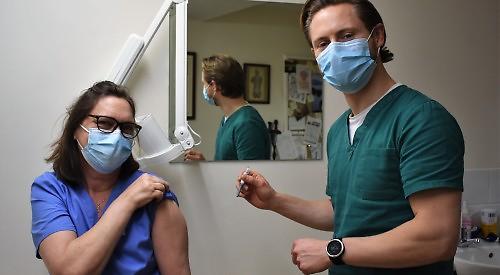 MORE than half of people living in Henley have now received at least one coronavirus vaccination.

At the Hart Surgery, off York Road, 7,282 vaccinations have been given, with 54 per cent of all patients having had their first dose and 22 per cent two jabs.

The neighbouring Bell Surgery has given 5,118 first vaccinations, which is also 54 per cent of all patients. A further 2,081 have received a second jab.

The primary care network, which also includes the surgeries in Nettlebed and Sonning Common, has given more than 22,000 vaccines, including 868 on one day last month.

More than 5,400 of patients at Sonning Common Health Centre, just over half of those registered, have received their first dose.

Goring and Woodcote’s joint medical practice has given 7,600 vaccinations.

There were 20 covid-19 cases in South Oxfordshire in the last seven days, the same number as last week.

The infection rate remains the same at 14.1 per 100,000 of the population, while the number of deaths since the start of the pandemic is unchanged at 163.