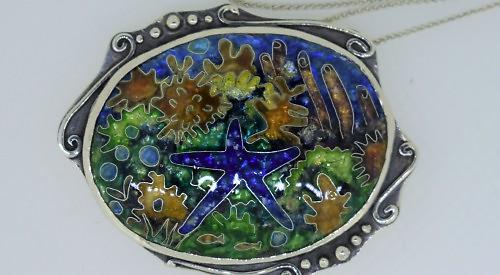 A GOLDSMITH in Henley has made a bespoke piece of jewellery to raise money for a marine conservation charity.

Lucy Riveiros, manager of Lawsons in Duke Street, spent three weeks creating the £850 pendant, which depicts coral reefs, a starfish and sea plants in a mixture of blue, green and gold. It is made of enamel glass and sterling silver and has an 18in chain but can also be worn as a brooch.

The jewellers is inviting customers to buy raffle tickets over the next month.

All the proceeds will go to Sea Shepherd UK, which aims to prevent the destruction of ocean habitats and wildlife. Miss Riveiros was inspired by a TV documentary called Seaspiracy, which examined the harm humans are doing to marine life and the environmental impacts of fishing.

“It really hit home,” she said. “The reason why I chose the sea scene is because it reminds me of how fragile the ocean is. I really wanted to spread awareness. I think people were really starting to understand the issues that David Attenborough was trying to raise but it has gone on to the back burner because of covid.”

Raffle tickets cost £3 each, or £12 for a strip of five, and are available from the shop.