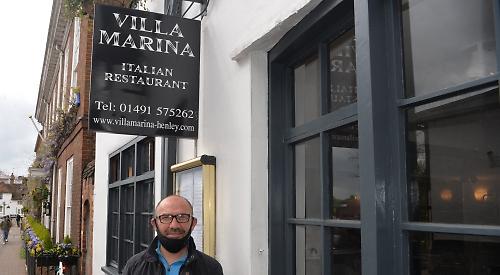 THE hospitality industry will welcome customers indoors for the first time in four months next week.

People will be able to meet in groups of up to 30 outdoors or six inside under the third stage of easing lockdown restrictions on Monday.

Some pubs, restaurants and cafés re-opened last month but others couldn’t provide outdoor service or decided to wait a little longer.

Shellfish Cow, a restaurant in Reading Road, Henley, will re-open on Tuesday.

The steak and shellfish restaurant, which employs 10 people, first opened in December 2019 but missed out on a significant amount of trade last year due to the pandemic.

Manager Jason Haskins said: “It has been a long wait. Our last day was Christmas Eve and we would never have expected it to go on for this long.

“We’re fairly confident this time and we should be able to pick up where we left off. I’ve been dealing with a fair few emails every day. We’re very happy with the number of bookings we’ve had.

“The support from the Government has helped quite a bit but there are still some things we need to pay off. Not being open has hit us but we still have a little bit to fall back on.

“We haven’t had to let anyone go but naturally some people have decided to move on.

“I think we will finally see everything working as it used to be in June, so it won’t change straight away. It will be our first year with the regatta this summer and I’m sure that will help.”

Jayne Worrall, landlady of the Bull in Wargrave, decided not to offer outdoor service because she felt it would not be viable as the pub has only a small garden with six tables.

Mrs Worrall, who has been at the Brakspear pub on and off since the Eighties, said: “It is a relief to get the pub going again and it will be even better when all the other restrictions are lifted in June.

“We are still limited because we can only do tables of up to six people indoors. I really hope things go well but it is difficult to say. When we opened after the lockdown last year it was really quiet. It took a while to get going again.

“I think people will be a lot less nervous this time. A lot of people have had their jab now and they are more keen to get out and see others. Now we just need some good weather.”

Ted Docherty, who runs the White Hart in Nettlebed and the Crown in Playhatch, said Monday would be a “massive step forward” for the industry.

The pubs, which are both owned by Brakspear, have been open over the last month as they have large gardens.

Mr Docherty said: “We were fortunate with the weather for the first couple of weeks of outdoor-only but last week and this week have been a completely different ball game.

“Because the cover has to be 50 per cent open, you can get around the rain but the thing you are battling with is the wind.

“After the first week or two of being able to go back to the pub with your mates, people weren’t as desperate to go and sit outside in the cold. I know it wouldn’t appeal to me.

“We thought offering a table service outdoors would be easy but it was totally different. The muscle memory of how you do things is different and it took us two weeks to get used to it. It has been challenging and interesting at the same time but we are now looking forward to customers coming inside again. It has been a long slog but we are raring to go.”

Fernando Coppola, manager of Villa Marina in Thames Side, Henley, said he was looking forward to seeing customers again.

He has spent the last few weeks refurbishing and decorating the restaurant, replacing the floor and installing new air conditioning.

The restaurant has no outdoor seating so has been closed since the end of last year. It can seat about 50 people indoors.

Mr Coppola said: “It’s a big relief. I would never have imagined being closed for this amount of time so it’s nice to come back.

“We feel this is the right time to re-open. The country is doing well with covid cases, particularly in this area. We have had some nice messages from customers, asking us if we are okay and telling us to look after ourselves.”

Part of the upstairs has been converted into a reading area, which involved redecorating and changing the layout.

There are about 40 tables inside and another 18 outdoors and manager Tami Rooke said it would be nice for customers to have a choice.

She added: “It is supposed to be sunny next week, so people will probably want to sit outside. Everyone has been saying ‘it’s not that long to go now until Monday’ so they are definitely looking forward to it. We have been so lucky with the support we’ve received from the people of Henley — they have really kept us going.”

The Waterfront Café in Benson also re-opened last month but proprietor Chris Price said he was looking forward to having people indoors again.

He said: “We have worked hard to get it back up and running. We’ve got all the social distancing worked out and we’re ready to go.

“We’ve done very well in the last month considering. The weather has not been that reliable.

“We put a lot of effort into making the outdoor area nicer, such as introducing heaters. It has been received very well and we’ve had lots of positive comments.”

The café normally seats 350 outdoors but this has been reduced to 200 due to covid restrictions. There will be room for about 70 people indoors, which is just under half the normal capacity.

Mr Price, who has run the café for 32 years, added: “I think now is about the right time to go back indoors. I think people are a lot more understanding and they want it to be right.”

Tom Davies, chief executive of Brakspear, hopes the Government will bring forward the end all of restrictions from June 21 but is happy to have moved to the next stage for the time being.

He said: “It’s long overdue but I’m pleased we’ve been given the green light. It’s still not the end of it because it is still table service and no standing at the bar.

“It will reduce capacity noticeably at many pubs but it certainly gives operators a lot more choice.

“The first week of April was very good, but last week was pretty poor. I think people were slightly fed up of sitting outside in the cold and the novelty has worn off.

“From what we are seeing, this time there is a lot more confidence. Last year, a lot of people were still nervous about sitting inside but with the jabs being as successful as they’ve been there is much more confidence this time.”