James and the giant readathon 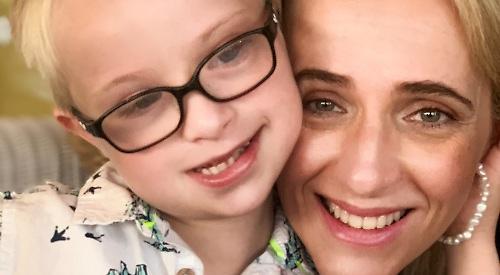 A YOUNG boy with Down’s syndrome has challenged himself to read 30 books throughout May to raise money for charity.

James Marsh is spending at least an hour a day working through a combination of children’s stories, tutorials and textbooks about animals and wildlife, including some aimed at teenagers and adults.

The eight-year-old, from Caversham, enjoys one hour-long session before going to bed and sometimes fits in an extra 15 minutes’ reading in the mornings before walking to Caversham Primary School, where he is in year 3.

Whenever he struggles with long words, his mother Nicole and father John help him to sound them out slowly or write them on a piece of paper.

James has so far raised almost £1,200 for Chattertots, a speech and language therapy charity for children with Down’s syndrome which has been supporting him since he was one.

The money will go towards its annual week-long summer camp at Manor Green special school in Maidenhead. James is the only child at his school with the genetic condition so this event will give him a chance to meet others who have it while improving his speaking skills and knowledge of English.

His mother, who is Chattertots’ secretary, says it has helped James’s education because his symptoms include low muscle tone, which makes diction harder, and difficulty processing language.

The charity, which supports 30 families across Berkshire, also advises his school on adjusting classwork to his abilities, allowing him to sit in the same lessons as his friends as well as having daily one-to-one sessions with his teachers.

It couldn’t stage face-to-fface meetings during the three coronavirus lockdowns so its running costs increased as therapists had to teach children individually over the internet.

The summer camp, which is held in the first week of August, could cost more than £7,000 because it needs specialised staff, including therapists from the charity Symbol UK who teach in small groups. Mrs Marsh says James will benefit as many of his favourite activities, such as riding horses at Wyfold Riding for the Disabled, couldn’t take place during the pandemic.

She said: “The camp is a bit too far into the future for James to really understand the importance of his challenge but he loves working with his therapist and understands that it’s helping towards that.

“Although he has settled in really well at school and we’re grateful for how much they’ve done to accommodate him, it’s good for him to play with others who have Down’s syndrome and see them every year.

“We’re really surprised by how much we’ve raised in such a short time and we’re getting loads of supportive comments about the effort James is putting in, which is really motivating.

“He gets a sense of pride from developing his skills and it goes to show that raising money isn’t just about grown-ups running marathons. Everyone has their own personal challenges and it’s a big accomplishment.”

James has so far finished five books in the Oxford Reading Tree educational series, including Dragon Danger!, and is now moving up to a more difficult level. He is also reading several books by children’s author Julia Donaldson, including the Zog series, his favourite being Zog and the Flying Doctors.

He is also reading  Oi Cat! by Kes Gray and Jim Field while his favourite reference book is Wildlife of the World by naturalist Chris Packham.

Mrs Marsh said: “He obviously isn’t reading at the same level as his peers but he has always loved books and is very determined to learn. He does it regularly anyway but this month he’s really cramming them in.

“The animal books are far more difficult because they’re aimed at a higher age group but he knows all their names just by looking at them and talks about them all the time.

“He loves the big cats like leopards and cheetahs as well as iguanas, chameleons and scorpions. He once corrected me when I called an animal a mountain goat, rightly pointing out that it was an ibex.

“The harder books are more time-consuming but they help increase his vocabulary and he isn’t put off — he’s very much on his own mission. As long as he feels as though he’s making progress, he’s very happy.”

James, who has 11-year-old twin sisters Isabella and Finley, and brother Adam, six, who also go to the primary school, spent much of his early life in isolation after being diagnosed with acute leukaemia in 2015.

He started school soon after finishing two years of cancer treatment, including chemotherapy, which made him sick, and regular blood transfusions to maintain the number of healthy cells in his system.

In 2017, James missed being photographed with his reception classmates for the Henley Standard’s First Class supplement as he was off sick so he was thrilled when we arranged to take it again with him in the picture.

He was undergoing treatment until the end of that year and celebrated finishing at Christmas with a visit to Santa’s official residence in Lapland.

His mother says he learned to love stories during his illness as he often looked at picture books but he no longer thinks about that time.