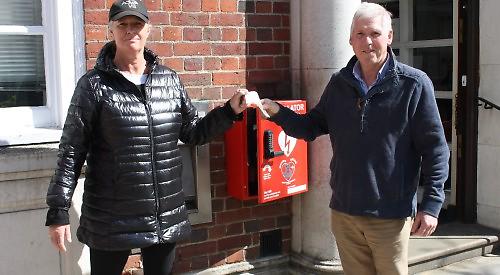 VOLUNTEERS are needed to check defibrillators in the Henley area which are once again at risk of failing.

Many of the 72 devices, which the Millie’s Dream charity has been installing in public places since 2013, are running out of charge because they haven’t been inspected since the Government imposed the first coronavirus lockdown in March last year.

The problem must be rapidly addressed because they may no longer be able to deliver a life-saving shock to stop and restart someone’s heart in an emergency.

Furthermore, some of the electrode pads which are stuck to a casualty’s chest may no longer be adhesive after exceeding their use-by date.

Sarah Roberts, who founded the charity and named it after her 14-year-old daughter Millie, who has a heart and lung condition, says she couldn’t check devices during the pandemic because she was busy with her job as clinical director of the Active VIII physiotherapy clinic in West Lane, Henley.

However, she recently examined all the charity’s units and found 11 were either displaying a “low battery” warning light or the pads had expired, or both.

She also replaced pads and electrodes on several others including at the HSBC bank in Market Place, Higgs Group in Station Road, Swiss Farm in Marlow Road, all Henley, and the Baskerville pub in Station Road, Shiplake. Mrs Roberts, of King’s Road, Henley, has already recruited four helpers as she couldn’t carry out all the inspections by herself, as she had been doing, but says she could still do with more help.

Her charity also can’t afford to keep buying replacement parts, which cost up to £250 per defibrillator, so she is appealing for donations to continue funding them in the long run.

She would also like to replace the locks with a newer design which is easier to open in a hurry. These will cost about £110 per box.

Millie’s Dream faced a similar crisis in 2017, when a Henley Standard investigation found a number of the batteries, which can’t be recharged, had exceeded their
36-month lifespan by up to a year.

Thirty-one defibrillators are kept outdoors in locked red boxes, for which a 999 operator will issue a code, and the rest are in businesses, schools, GP surgeries and other public buildings as well as private residences.

The latter can be checked by the hosts but Mrs Roberts needs help checking the others every three months or so. She says it is an easy task and volunteers would be shown how to do it.

She said: “Because of the lockdown’s impact on my business, I haven’t had the time or energy to do an audit in about 12 months.

“Before then, Millie and I would just randomly check six here and there but that’s not tenable in the long run.

“Now that we’re coming out of the pandemic, I could use a couple of volunteers for this five-minute job. They don’t have to be medically qualified as anybody could do it — the only challenge for me is the sheer quantity and the wide area they cover. It’s an ideal task for a retired person and this could make the difference between life and death. A lot of people have been touched by heart conditions so all help is appreciated.

“I can understand why people might be afraid to touch the devices but they’d just need to take a quick look and note the date in a little book, which the people hosting defibrillators are already doing.

“We’re VAT exempt but replacing batteries and electrodes costs a lot of money and people are understandably not focusing on charities like Millie’s Dream right now.

“However, we’ve had three survivals thanks to our machines and don’t want to have a situation where someone goes into cardiac arrest only for a rescuer to find the battery is dead. That would just be dreadful, maybe even worse than not having them at all.

“We’ll contribute what we can in key areas but it would be good if communities could take ownership of their defibrillators. It costs a relatively small amount every two or three years, which works out as very little per resident annually.

“People in the Henley area have put so much time, energy and enthusiasm into the project since it started, as well as raising more than £80,000 to get it where it is today, so it’s important that we keep it going.”

David Wright, a retired vascular surgeon who survived a cardiac arrest on the squash court at Henley leisure centre in 2019, is the first person to volunteer and will help to
co-ordinate others who come forward.

He has donated £500 to Millie’s Dream and will raise additional funds by selling Henley-themed bone china mugs which he makes at his home studio in St Mark’s Road, Henley.

Mr Wright said: “If you have a cardiac arrest and aren’t within three minutes of a defibrillator, which anybody can use, you’re at risk of irreparable brain damage or more likely death.

“Your chances of survival in hospital are below 10 per cent but much higher with immediate intervention, which I’m a testament to.

“Many years ago, I also used a defibrillator with a successful outcome while on holiday so I’m a big supporter and the least I can do is go out, check them and give the boxes a clean at the same time.

“Sarah has made a fantastic contribution to this area and placed us right at the top of the pile in terms of availability but obviously a defibrillator is no good at all if it doesn’t work.

“The replacement batteries are also an ongoing cost and they’re pretty expensive so it would be wonderful if people could recognise this with donations.”

Millie, who attends the Oratory School in Woodcote, was diagnosed in childhood with paroxysmal atrial tachycardia, an electrical malfunction of the heart which in severe cases may be life-threatening.

Ms Roberts launched the appeal after footballer Fabrice Muamba suffered a cardiac arrest on the pitch and survived thanks to a defibrillator.

Its beneficiaries include veteran rower Bill Evans, of Upper Thames Rowing Club in Henley, who was revived after a near-fatal heart attack on the water in April 2019.

A defibrillator was installed at the clubhouse following the death of fellow member David Church on an ergometer in 2017.