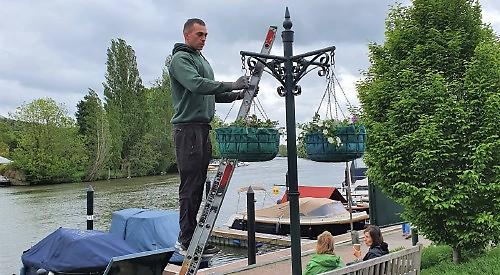 A TOTAL of 220 summer hanging baskets have been bought by businesses and residents in Henley.

That is only 21 less than the record set in 2016 by Henley in Bloom’s annual campaign, which is supported by the Henley Standard.

The baskets are now being installed by Windowflowers, of Burnham, who provide and maintain them throughout the summer.

This year’s plants are pink and purple fuchsias, verbenas, pelargoniums, surfinias, petunias and calocephalus to celebrate life returning to normal after the lockdowns as well as encouraging pollinating insects.

Among the latest buyers is Maggie Wilkinson, who bought one basket after seeing them being installed in the town centre.

Ms Wilkinson, of Greys Road, said: “It’s the first time I have ordered one. I noticed in the paper that it may not be too late to order so I did and I have already ordered one for winter too.”

Badgemore Golf Club has bought 10 baskets to hang around the clubhouse and Badgemore House. Lindsey Anderson, course manager, said: “We’ve been so impressed with the displays in Henley so we’re on board now and for the future.

“The consistent quality year on year persuaded us to go for it. When you drive through Henley they stand out and they last throughout the season.” Pamela Stuart has bought a basket for her home in Thames Side for the second year.

She said: “They are brilliantly made. I think more businesses could get involved in the campaign as there or one or two in the town that look a bit bare.”

Facy, the department store in Market Place, has ordered two hanging baskets each year since the campaign started in 2013.

Cindy Facy, a director of the shop, said: “We have them all the time, including the winter baskets. It’s just a really nice thing for the town that everybody takes part in and we all want the town to look nice.”

The deadline for orders has gone but the town council may take late orders. For more information, email t.rae@
henleytowncouncil.gov.uk