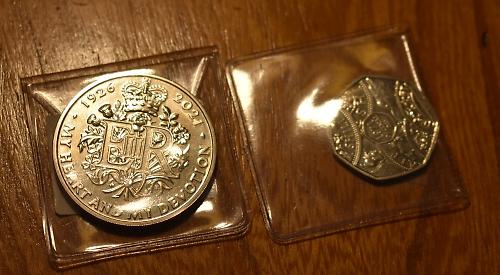 A BELL-RINGER from Shiplake has received Maundy money from the Queen in recognition of his service to the community.

Cyril Crouch, 87, received the honour through the post after the Royal Maundy service was cancelled due to the coronavirus pandemic.

Usually, the Queen would hand out the money in person at a church or cathedral but this has not happened for the last two years due to covid-19.

This year, the ceremony was to take place at Westminster Abbey but the Maundy money was blessed at the Chapel Royal, St James’s Palace, before being posted instead.

Recipients also received a letter from the Queen which told of her sadness that the ceremony could not take place but gave thanks and said their efforts were appreciated.

A total of 190 people, 95 men and 95 women, received the money to correspond with her 95th year, with two purses of money to mark the occasion.

The red purse contained a £5 coin and a 50p coin, which symbolises the original medieval gift of food and clothing.

This year the coins commemorate her 95th birthday and the 50th anniversary of Decimal Day.

The specially minted pieces are usually handed out to worshippers over 70, who have been nominated by local dioceses for their contributions to the church and the community.

Mr Crouch, who lives in Baskerville Lane with his wife Mavis, 93, said the special delivery came “out of the blue” and he felt a little embarrassed to receive it.

He said: “I have always been aware of Maundy money ever since I was a chorister at Peterborough Cathedral as a boy.

“I knew that the Queen handed it out every year and the number of pennies for the year of her life.

“But my package came out of the blue. I was surprised and puzzled as to where someone should get my name from and why it had been submitted. When it came and I saw the royal crest on the outside I thought, ‘What could this be?.”

Mr Crouch is on the parochial church council at the Church of St Peter and Paul in Shiplake, whre where he has rung the bells since about 1972.

He said: “My wife and I have had long involvement with the church. She ran the choir and played the organ for a number of years and I have been involved with bell ringing and was involved with the restoration of the bells when we had them all recast.

“We have also run a handbell ringing group, which we have run for charity groups in Henley.” Mr Crouch was born in Peterborough where he attended King’s School. He first learned to ring bells at the age of 16 but didn’t do it again until after he moved to Shiplake in 1970.

After leaving school, he spent nine years in the armed forces, having stayed on after his national service, and worked in bomb disposal in Wales and Scotland as well as running an ammunition repair workshop in Singapore.

He then moved to the Gurkha Division and served in Malaya for two-and-a-half years.

On returning to the UK, he had various jobs in food manufacturing and restaurant planning and ran the catering division at Express Diary.

Mr Crouch met his wife in 1962 while he was working at J Lyons. Both lived in a house in Ealing — she was upstairs and he was downstairs. They soon got to know each other and shared a love of music. They were married a year later in Woodborough, Nottinghamshire, where her sister lived.

Mr Crouch moved on to British Airways in 1979 where he stayed for 25 years, working in a range of jobs.

One thing he did was to develop a frozen food concept for staff catering and ran the two food production centres which produced thousands of meals a day.

The couple decided to move to Shiplake because it was an easier commute to Heathrow than where they were living near Watford.

They went on to have three children. Julia, who works at the British embassy in Moscow, Peter, a former purser at British Airways, and Clare, who managers a group of foster carers. All attended Shiplake Primary School.

Mr Crouch was semi-retired after leaving BA and worked as a consultant until giving up work in his early seventies.

His wife worked as a classroom assistant at the primary school and runs a weekly recorder group. Both have also belonged to the Henley Singers.

Mr Crouch said the covid pandemic has restricted bell-ringing due to the need for social distancing but he hoped it could resume soon.

He said: “To do it properly you need concentration and commitment. You can keep it very simple but you can also become addicted and can make it more complicated. You have to be able to control the bell and then listen.

“When you ring with other people, you want to make sure there is space between the sounds. If you ring for a quarter peel that will last for 45 minutes and that’s 1,250 different changes where the bells will ring in a different order.

“If you ring for a full peel that’s 5,040 different changes and last two hours and 50 minutes but it is easier to do now because the bells are newer and not as heavy as the old ones. We are hoping to ring bells again because it is part of the British scene.”

Mr Crouch said his children had advised him to have his Maundy money framed.