Call for evidence of footpath being used in Seventies 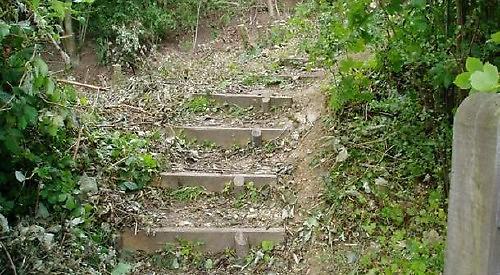 A FOOTPATH in Henley could be made a right of way.

This would mean that the route between Makins recreation ground and Haywards Close remained open to public use.

Oxfordshire County Council is carrying out a public consultation but has said it needs more evidence that the path was in use during the Seventies in order to approve the designation.

The path starts at the junction with Haywards Close and proceeds through a wooden pedestrian gate and up via wooden streps cut into an earth incline. It then continues over the hillock, through a wooded area anddown into the recreation ground, off Greys Road.

The council says the path came about after Haywards Close was built in the late Sixties or early Seventies as an access route to the recreation ground.

Prior to this the site was fields with no known public rights of way so the route does not show on historical documents or maps. The earliest map of scale which shows Haywards Close was produced in 1975 and shows a path at approximately the same location but is not the claimed route. Later versions did not show the claimed route until 2016-19.

A landowner contacted the council in 1997 stating they did not want the path to be designated but this came to nothing.

Now the council is looking at the 20-year period prior to that to see if there’s proof the path was used as a public highway without interruption.

The application is supported by evidence from 27 users claiming use of the route from 1972 to 2010, the year of the application, which demonstrates that the public was not prevented from using the route, with the exception of some signs or a closed gate.

Deputy Mayor Michelle Thomas, who chairs the Henley Town Council’s planning committee, is urging residents to share any information that could prove it was in public use in the Seventies.

She said: “We know that this footpath is very well used by local people. Although it is not currently under threat, it would be a great shame to lose it.”

If the application is approved, the definitive map and statement of public rights of way will be altered.

If you have any evidence of the footpath being in public use during the Seventies, email Louise Hastings by June 11 via email on l.hastings@henleytowncouncil.gov.uk or call (01491) 576982.