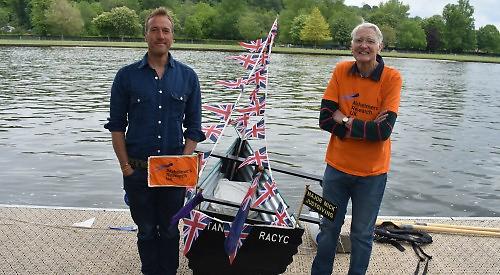 HE’S off again. Michael Stanley, aka Major Mick, is to row 100 miles for a second time in his homemade tin boat.

The 80-year-old retired army major completed the challenge for the first time last year in the Chichester Canal in West Sussex and raised more than £44,000 for his local hospice in Bosham.

This time round, he’s rowing in stages on different waterways and raising money for Alzheimer’s Research UK.

To drum up some funds, Mick visited Phyllis Court Club in Henley on Friday and tested his boat, Tintanic II, on the Thames.

He was also wished good luck by television presenter Ben Fogle, who is known for his own adventures.

Mick, who served in the Royal Scots Dragoon Guards for 35 years, said: “I’m doing this because I’ve got so many people who have had this disease and not only is it dreadful for the individual but for their family and friends.”

Recalling last year, he said: “I had such a wonderful time and I really enjoyed chatting and bantering with other people on the towpaths — it was really great fun.

“It was also remarkably easy. I did about three six-mile rows a week.

“The weather wasn’t too good and I had to battle through a few rainy days.”

Throughout this month, he will be rowing from the village of Hunston three miles Chichester and back three times as well as from nearby Dell Quay to Itchenor twice.

He will also be clocking up some miles on the Beaulieu River in Hampshire and the London Regent’s Canal. He will then do some rowing in Wales in July before heading to Scotland in August.

Mick, who lives with his wife, Sally, said: “I’m looking forward to a change of scenery and meeting different people.

“The first real challenge will be the Beaulieu River and having Lord Ralph Douglas-Scott-Montagu, 4th Baron Montagu of Beaulieu, see me down the river. It’s quite a special place for me as my father used to have a small boat and we’d row down there together in 1947. As a teenager I also used to disturb the peace going to rock concerts, so it’s very nostalgic for me.

“In Scotland I will row in Loch Ness and hope I won’t be a nice crunchy breakfast for the Loch Ness monster.”

Ben, who lives in Fawley said: “Mick’s challenge is hugely inspiring — and entertaining — not only because of the distance, but because Mick has painstakingly built his own boat using items you’d normally find in your garden shed.

“It is putting smiles on people’s faces as well as raising a huge amount of money for charity. I do hope that, where they can, people will help him towards his £20,000 target.”

Ben, 47, was allowed to have a go in Tintanic II and said: “It’s very comfortable. Wow, she’s got really good stability. She’s beautiful can I say, though I don’t think I want to row across the Atlantic in this one.” Mick said it was nice to have the celebrity’s support.

“He is a great man and a very nice person,” he said. “He is very genuine and supportive and I couldn’t fault him.”

His first boat, Tintantic, was made using two sheets of corrugated iron and a hose pipe with curtail rails for oars. He later sold it for £480.

The new and improved version, which he made over Christmas, uses similiar materials but Mick concentrated on making it more watertight.

He said: “I’ve made the sternpost’s wider, changed the positions of the rowlocks and made minor adjustments.

“It was difficult to find the corrugated iron because retailers hadn’t had deliveries due to covid.

“I used to use Sally’s garden kneeling pad to sit on for comfort but I have now cut up the dog’s old bed to use as cushion — it’s more comfortable.”