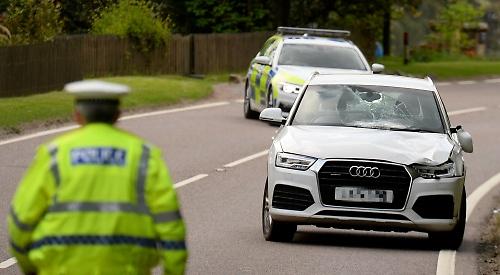 A TEENAGE boy from Henley has died after being hit by a car.

Edward Bush, 16, was struck by a white Audi Q3 on the A82 at Kirkton, near Lochend in the Scottish Highlands, at 4.20pm on Thursday.

He was taken to Raigmore Hospital in Inverness with serious injuries and police confirmed his death yesterday (Saturday).

Edward was walking with two girls of the same age, one of whom has since been discharged while the other remains in a critical condition.

His family said: “Edward will be missed so much by so many, as he was a truly outstanding young man with such an incredible and bright future ahead of him.

“He will never be forgotten and will remain eternally loved and adored by his brothers, parents, family, and friends.”

The road was closed for six hours while officers investigated.

Roads policing Sergeant Angus Macleod said: “Our enquiries into this fatal crash are ongoing and it's important we establish exactly what happened.

Anyone with information should contact Police Scotland's Highlands and Islands division on 101, quoting reference number 2448 of June 3, 2021.