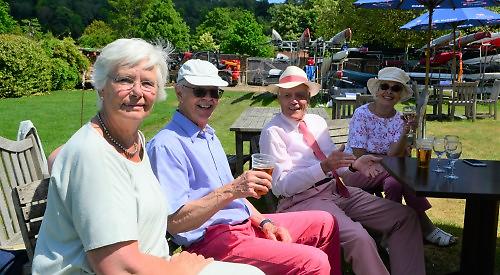 A NEW outdoor dining area opened at Leander Club in Henley on Saturday.

Members enjoyed food and drink on the newly built decking as well as live music.

The area includes an outdoor bar and kitchen.

The ribbon was cut by Leander and Team GB cox Henry Fieldman, who has two world championship gold medals.

Alastair Heathcote, the club’s general manager, said: “We have been building this new outdoor area for the past three months.

“We have the best view in the whole of Henley so why not use it?”

Leander president Mike Sweeney said: “Alastair had the vision for turning this space into a dining area and I think most members will agree with me that his vision was pretty damn good. This will be a very different year for Henley Royal Regatta but I am sure it will be a very good year for Leander.”

Tony Anderson, a social member of the club, said: “With the work they have done to enlarge the decking and the facilities they have put in place, the club is going to be super. It’s a great improvement and I hope people will come and use it in large numbers. It’s a great asset for Leander.”