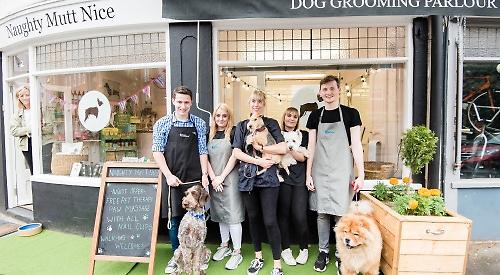 A DOG grooming parlour in Henley is moving to bigger premises in order to expand.

Naughty Mutt Nice is to leave its home in Reading Road, at the junction with Station Road, for the former In The Groove record shop, further along the road going towards the town centre.

The new premises has room for two more grooming tables and a second bath with a pressurised water spray to make cleaning easier, especially for bigger dogs. It is due to open on July 10.

Karole Robertson, who took over the business from Aspen Weatherburn in 2017, hopes to add another part-time worker to her four-strong team.

She also intends to sell a wider range of goods and accessories, particularly those aimed at puppies, and to install a large freezer so she can sell raw dog food.

Mrs Robertson, who lives in Ruscombe and is originally from Brazil, had wanted to expand for some time and was planning to take over the former Sparkes jewellery unit next door to her current premises but backed out when it became clear that extensive internal work was needed.

She then viewed the inside of the old record shop.

Mrs Robertson said: “I immediately thought it would be good for me because although it looks small from the outside, I realised it was pretty spacious. The landlord had received offers from several businesses, including hospitality and hairdressing, but he went with me because he liked the sound of my business. It has taken a bit longer than I expected because some of my orders have been delayed but it’s a really exciting time.”

Mrs Robertson said her business was thriving despite the coronavirus pandemic because customers had quickly returned once the parlour was able to re-open.

She said: “The situation was bad and covid did hit us, albeit not as badly as other businesses, so I feel fortunate to be able to bounce back even stronger than before.

“Most regulars were back as soon as they could because they’d been trying to cut their dogs’ coats at home, with pretty mixed results, and were pleased to be able to consult a professional again.

“It’s a great feeling to have reached this point, although it has taken a lot of hard work behind the scenes. The economic climate is still quite uncertain but we’re confident because people in Henley love their dogs. You see so many out and about and they’re a huge part of people’s lives.

“People don’t want to leave the area for supplies so the more we can provide for them, the better.”

Mrs Robertson, who began her career in hospitality and hotels, had previously run a mobile grooming business.