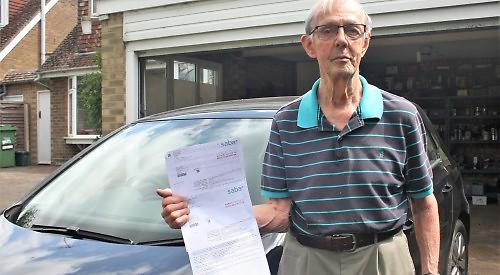 A DRIVER was threatened with a £100 parking fine after he drove through the Townlands Memorial Hospital car park in Henley twice without stopping.

Cyril Crouch, 87, briefly passed the hospital off York Road after he and his wife Mavis, 93, had attended two doctors’ appointments at the Hart Surgery next door.

He parked his Volkswagen Golf in the surgery car park, which is shared with the neighbouring Bell Surgery, during their visits on May 26 and 27.

On both occasions he left through the Townlands car park, as directed by the one-way signs in place.

The company, which has a contract to enforce parking at Townlands, claimed to have photographic evidence that he had parked there. It said it would keep the images in its records in case he “parked” in the hospital car park again and that if he did so, he would be fined £50 for each “offence”.

Mr Crouch said he called the firm to complain and was told he should have registered his car’s details with the surgery but the surgery said this was not necessary and it had no such arrangement with Saba.

The case is reminiscent of a previous enforcement firm, Smart Parking, which was sacked from both the hospital and surgeries after the Henley Standard exposed it for fining people unfairly. Mr Crouch said: “We parked at the surgery because my wife has just had a knee replacement and can only walk with sticks so we had to be close. We were probably there for about 30 minutes each time.

“We only drove through the hospital to get out, following the road past the main entrance and back out into Clarence Road. We certainly didn’t stop at any point.

“Saba said I was the second person to point this out but I want this cleared up before it becomes a major problem. We all remember what happened with the last enforcement company.

“I was very alarmed when I opened the letter because I assumed it was a fine. Saba pointed out it was only a warning but it’s not nice to receive something like that and I wonder whether anyone else has been affected. I’m also not comfortable that they took a photo of my car and are keeping a record of it when I haven’t done anything wrong. I don’t believe that should be allowed.”

Sarah Moberly, practice manager of the Hart Surgery, said: “There are cameras to detect people coming in and out of Townlands but these allow a short period of time before charging anybody so there shouldn’t be a problem. We got rid of our enforcement because it was supposed to benefit patients but we were receiving so many complaints every day that it wasn’t worth the hassle.”

The number plates of all vehicles on the hospital site are scanned by automatic recognition cameras and patients must enter their registration number on a touchpad at the reception desk. Anyone not signing in may be charged up to £50.

This was previously done by Smart Parking, of Birmingham, which was ordered off both sites following a deluge of complaints.

The system was meant to prevent abuse by shoppers but Smart would repeatedly demand up to £160, sometimes from patients who had simply mistyped their registration numbers, as revealed by the Henley Standard’s Not Very Smart Parking campaign. Some patients were threatened with court action.

The surgeries had hired Smart Parking because people would park and then go shopping in town, sometimes leaving no space for legitimate patients, and become aggressive when challenged.

Saba confirmed the warning was sent to Mr Crouch in error. It said new number plate cameras had recently been installed and were still being tested.

A spokesman said: “Mr Crouch’s registration plate was picked up as he drove through the hospital and a warning notice was mistakenly issued to him. We apologise for any alarm this may have caused and thank Mr Crouch for bringing the issue to our attention.

“We are in the process of analysing and tweaking the system to ensure that notices like these are not mistakenly issued in future.  Once live, the new parking system will allow the patients of Townlands Memorial Hospital access to hassle-free parking as they attend appointments.”

A spokeswoman for NHS Property Services, which is responsible for the site, said: “We are glad that Saba is working to resolve the issue so that we can continue to support the NHS to provide excellent patient care.”