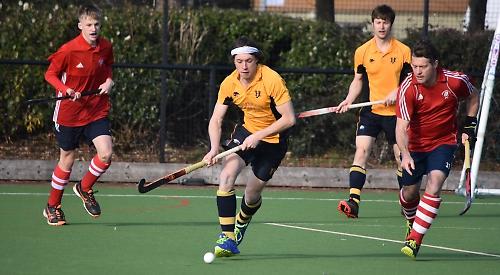 HENLEY Hockey Club wants to raise £1,000 for its own defibrillator following the collapse of footballer Christian Eriksen.

The club, which plays at the Jubilee Park sports ground off Reading Road, only has access to one at certain times and fears a player or official could be taken ill when it isn’t available.

On Saturday, the Danish midfielder went into cardiac arrest during a Euro 2020 opening stage match against Finland. Eriksen survived thanks to prompt treatment including the use of a defibrillator, which shocks the heart back into a normal rhythm.

The hockey club will buy the £2,000 device through the Millie’s Dream charity, which has installed dozens in public locations in and around Henley since 2013.

It has already received £1,000 from an anonymous donor and hopes businesses or members of the public will make up the difference.

The machine could be mounted on the club’s headquarters across the street so anyone could use it and would be locked inside a cabinet with a code provided by 999 operators to prevent vandalism.

At present, the nearest alternative is at the YMCA flats off Lawson Road, which is too far away as treatment must be administered as soon as possible.

AFC Henley, which also plays at Jubilee Park, has a portable device for weekend matches but the hockey club can’t use this at other times including its Tuesday and Thursday evening training sessions. There is also a defibrillator at Tesco next door but the club often plays outside the supermarket’s opening hours.

Club president Chris Baker said: “There should be one on hand at all times.

“We considered this a while ago but it got a bit lost and Eriksen’s collapse has prompted us to revisit it. If it can happen to him, it could happen to anyone.

“Millie’s Dream were very helpful and we’re pleased to have half the money already. Hopefully, the community will step in as it could benefit a lot of people.”

AFC Henley chairman Trevor Howell said the club could contribute and it was also checking its other defibrillators at the YMCA and Harpsden village hall following Saturday’s incident.

It will also arrange more training in the use of the portable defibrillator, which was secured through Millie’s Dream with a £900 grant from the Round Table Charitable Trust.

The permanent ones work automatically and can be used by anyone without training.

Mr Howell said: “Saturday’s incident showed what can happen on the pitch and our committee will have a conversation about the hockey club’s suggestion. We’re all feeling a bit exposed by the collapse and don’t want to be poorly prepared for these things.”