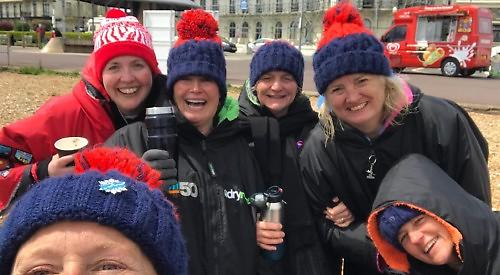 SIX women are aiming to swim the Channel in relay for a Henley charity.

Marika Perkins, Alaine Berry, Rebecca Bell, Vicky Elson-Smith, Elizabeth Hayes and Lee Saudan have been training for a year for the challenge sometime between June 30 and July 10.

They are called the Thames Marvels after the first letters of their Christian names.

Five of the women are members the Henley Open Water Swimming Club and were inspired by the Henley Mermaids, five fellow members of the club who swam the Channel last summer and will be attempting to swim the Bristol Channel next month.

The women started to train more than a year ago but couldn’t use public pools due to the coronavirus lockdowns and had to use the River Thames and the sea.

They all qualified to take part in the challenge by completing a
90-minute swim followed by a
30-to-60-minute break and another 60-minute swim, all in water below 16C.

She joined the open water swimming club in 2018 after spending hours on the side of the Thames watching Henry train to swim the Channel in relay in 2019.

She said: “Henry is a great swimmer and it has come from somewhere. He is phenomenal.”

She and Mrs Perkins did their qualifying swim at Caversham Lakes.

Mrs Bell said: “It was a bit scary actually. Marika is a similar pace to me but after 30 minutes I was like, ‘I’m actually quite cold’ and we still had 60 minutes to go.

“It was 14 degrees but we just put our heads down and powered through. It was fine in the end but in the sea it will be a bit colder.” The Marvels are raising money for the Charlie Waller Memorial Trust, a charity established in 1997 in memory of Charlie Waller, who took his own life while suffering from depression when he was 28. They hope to raise £10,000.

Mrs Bell said: “We had a family friend who killed himself and it was really awful and affected the whole family so I wanted to do something to raise money for mental health and suicide awareness.

“It’s so important to talk about it and boys don’t talk and Charlie Waller didn’t talk. All of us had had some kind of mental health to deal with through ourselves or family and friends.”

Mrs Perkins, 55, is a science teacher who lives in Rotherfield Peppard with her husband Philip and children Alexis, 24, and Joshua, 22.

She started swimming about five years ago after suffering from back injuries.

She said: “One day I said, ‘Why am I not doing more with the river?’ and I found out about the club and joined.

“I had a back operation and have two pins in it and swimming was a good way to get better and to work out in a way that wasn’t excessive for my body.

“I’ve now met these wonderful people and we decided that us mid-fifties-year-olds could do this. It has been the best 18 months because the love, friendship and camaraderie between us has helped our mental wellbeing. It was the one thing that was always consistent. It’s very much a therapeutic hobby. Even when it is freezing and you think, ‘What the hell am I doing, I’m 55 and don’t need this in my life’, the feeling of doing it is still wonderful.

“We are very good as a group at looking after each other. The adrenaline and euphoria of doing something like this makes you forget about the cold.”

Mrs Saudan, 54, is a marketing consultant who lives in Nuffield with her husband Richard and their red fox Labrador pup Ella.

Originally from South Africa, she has been swimming since she was two years old and also hopes to swim the Channel solo in the future.

She said: “Training has been quite different as we haven’t had any pools. We’ve been jumping off boats and flinging ourselves into the water and swimming in the sea. It has been amazing to share this with other like-minded people and it’s nice to have someone to swim with. It’s good as through lockdown we all say it’s our happy place.

“We always arrive very grumpy and we always leave with a big smile and happy to have spent time in our happy place — even when it’s zero degrees.

“It has been challenging and I’ve learnt more about hypothermia then I ever thought I’d know. It has been tough to be honest but we’ve managed and we got through it.

“We’ve done some night swimming, which I’d never done before, but it’s quite likely we will need to swim at night, which is quite a challenge.

“We’ve all gone through our injuries, broken ankles and broken ribs, but if all six of us are standing there at the starting line I think we’ll all be really pleased with ourselves regardless.

“I hope it doesn’t put me off the solo idea. I know the Mermaids are going to do other challenges so I hope we can go on to do more too.”

Mrs Elson-Smith, 51, is a physiotherapist who lives in Caversham with her husband Colin and has a daugher Lili, 19.

She used to be a synchronized swimmer representing Great Britain in European competitions from the ages of 14 to 18.

She joined the club two years ago but has been open water swimming since 2012.

She has been a swimmer since the age of 10 after her little brother, Jake, fell into a garden pond in Caversham when he was 18 months old and was left with severe brain damage.

Mrs Elson-Smith said: “Swimming has always played a huge part of our lives as a family, then and now. My daughter, Lili, has swum as a synchronized swimmer for nationals.”

She said swimming the Channel would be a big challenge.

“We’ve got plenty of fears and some of our friends are like, ‘Are you having a laugh?’” he said.

“However, doing our training in the lakes and river due to the lockdown has been good.

“It’s a big mental challenge for me. It’s about pushing yourself out of your comfort zone and raising more for a really good charity.”

Mrs Hayes, 56, from Milton Keynes, was the last woman to join the group but wasn’t convinced at first.

She said: “I’ve swum since I was 16 and I was a competitive swimmer in my thirties and forties.

“I knew Lee through a mutual friend and we did the Thames Marathon and we loved it and then she said she wanted to do the Channel as a relay.

“I was surprised and I didn’t warm to the idea as I’ve always been a pool swimmer so I am surprised how much I’ve enjoyed it.

“I had breast cancer seven years ago and I don’t think I’d have done this if I hadn’t had that.

“I’m all clear now but it does take a toll on your fitness and it has taken a long time to get that fitness back.”

Clare Stafford, chief executive of the Charlie Waller Trust, said: “We are so grateful to these six brave individuals for taking on such an incredible challenge.

“The training alone, which has seen them endure water temperatures barely above freezing and having to overcome the challenges of the pandemic, has been a marathon effort.”