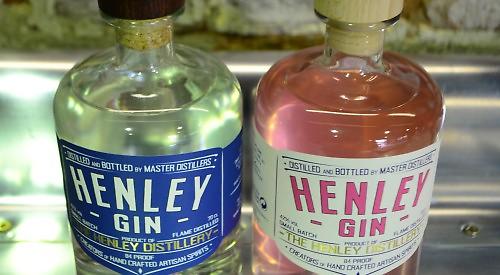 A MAN who gave up his university course to sell cocktails puts his own brand of gin on sale today (Friday).

At 27, Jacob Wilson has become one of the youngest master distillers in the country and has turned his passion into a business with help from his family.

The Henley Distillery is based in a barn at Hampstead Farm in Binfield Heath, part of the Phillimore Estate, and produces Henley Gin, a classic dry gin.

Mr Wilson said: “I’m really excited. It is the culmination of a lot of hard work and I can’t wait to start sharing it with people.

“We are one of the only distilleries in the country to not only be run by a master distiller but also owned by one.”

He grew up in Henley with his parents Alan and Terry Wilson and three siblings.

The family lived in Laud’s Close before moving to Fawley when Jacob was 13.

He was educated at Trinity Primary School in Henley, the Oratory School in Woodcote and The Henley College.

He then went to Southampton University to study engineering but after completing the second year of his four-year course decided to go in a different direction.

He took a year out to start his own mobile cocktail business in Henley called Molotov Cocktails and attended events, such as the Thames Traditional Boat Festival.

He realised he had found his passion in combining flavours and decided he wanted to turn his craft into a career by going into distilling.

He was so confident of his decision that he registered the name of the company.

Mr Wilson said: “I had a toss-up between going back to university and finishing my degree or jumping with both feet into the industry.

“I looked at my long-term aims and I thought having extra years of experience would be more beneficial.

“I found three distilleries that I really liked the look of. None of them was actually hiring at the time but I sent them my CV and a personal statement, which said ‘I would love to learn and if you’re thinking of hiring, please consider me’.

“The week after, I went for an interview in North Yorkshire with Masons Gin and a week later I moved up there. That bit of cosmic luck went in my favour.”

He had been working as assistant distiller at the family business for five months when the head distiller left and he was asked to replace him.

Just over a year later, he then left to work for a new gin distillery in Masham, which is also in North Yorkshire and better known for the Theakston brewery.

Mr Wilson then moved to South Wales to work the at Hensol Castle Distillery, another new business which had spent £3 million converting the basement of a castle into a state-of-the-art distillery.

“That was where I made the jump to being a master distiller,” he said. “I didn’t want to take that title until after a few years. I wanted to earn the label.”

He spent six months there and then worked as a consultant before returning to Fawley to live at home with his parents, from where they run their own businesses.

His father runs Extant Design, a commercial sculpture workshop specialising in stainless steel, and his mother is an artist who runs Sugar Eccentric making bespoke cakes.

Mr Wilson said: “They’re both self-employed and have run their own businesses throughout my life.

“I knew that’s where I wanted to be and just to be safe we registered the Henley Distillery.

“I always knew I wanted to learn the craft properly, then come back as an experienced professional and do it right. The business is a partnership between my dad and me. He built pretty much everything in the distillery, barring the stills and the sink. He did all the design work on the label and my mum made the signs.

“I’m spearheading it because I have all the experience but it is a real family effort.”

His sister Emma works in marketing for the business. His other sister Francesca in an English teacher working in France while his brother James is head chef at a restaurant in Cornwall.

The distillery has two 300-litre copper stills, which were custom made in Portugal.

Mr Wilson came up with the recipe for Henley Gin by keeping a list of his favourite flavour combinations during his time working at the other distilleries.

He said: “I ended up with about 16 or 17 botanicals. That doesn’t mean all of them will work.

“You don’t want all the flavours coming out and shouting at you. I want them to blend and complement each other to create the right flavour profile.”

“I always compare it to an orchestra — it doesn’t work if all the musicians are playing at full volume all at once.”

There is also a rhubarb and orange version of Henley Gin.

The distilling process takes a total of about two weeks using a technique that allows Mr Wilson to control the temperature.

The distillery has a bottling room, where the corks are put in by hand and the labels applied.

The first batches of each of the two gins were bottled this week with about 300 bottles of each. All these bottles are hand-numbered and signed.

Mr Wilson is also making another 10 types of gin for other companies, which is helping to fund the family’s investment.

He said: “The business plan has changed slightly because of covid but the contacts we’ve made to be able to fund this distillery through contract production was a game-changer.

“We have 40,000 bottles already ordered from various contract customers to be distilled between now and the end of the year. These are bespoke spirits under their own brand/label.”

He is optimistic about the future.

“Now it is my chance as a creative person and a distiller to be set free. I’m not bound by other people and now I can really express myself,” said Mr Wilson.

“The stills are the perfect balance between the size and the quality they produce. I would never look at getting a bigger one.

“My big dream would be to have 10 stills of the same size and six or seven distillers running them and several bottling rooms, all filled with people finishing off the bottles by hand. I’m passionate that the method doesn’t change as we grow.

“We really believe in this brand and think it can go far.”

The in-house shop is open from 10am to 6pm every day.