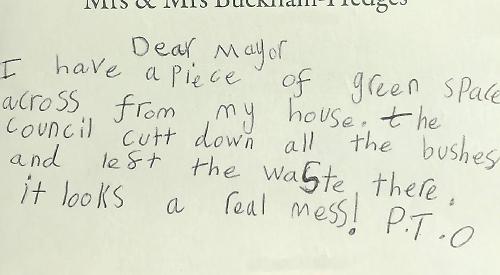 A PATCH of land in Henley is to be tidied up after a seven-year-old girl wrote to the Mayor to say it looked “messy”.

Ella Buckham-Hedges, who lives in Waterman Close, asked Councillor Sarah Miller if she could help transform the area nearby for “everyone to enjoy”.

She was disappointed when a large blackberry bush was removed by Soha Housing, which owns the land, following complaints from residents that it was overgrown.

This left a large patch of mud with bits of broken brick, twigs and blackberry thorns on it.

Ella, who attends Trinity Primary School in Vicarage Road, said: “The blackberry bush was massive and they came and cut it down.

“The leftover brown area is where it used to be and I was sad because I liked picking the blackberries from it. They haven’t even put grass back down.

“Now people leave rubbish on there, leave dog poo bags or park their cars on it. I was excited at first because I thought I could maybe play football on it but there were thorns on the ground, so I wrote to the Mayor to see if she would help.”

Councillor Miller was delighted to receive the card as it was her first letter since she became Mayor last month.

She said: “I really like that Ella has taken it upon herself to contact me and I’m all for making a green space look as pretty as possible. She’s very young and wants to make the area a nice green space for the summer. It could look nice with little effort. It’s a small patch of grass but it could look wonderful.”

Cllr Miller passed the card on to the Henley in Bloom committee, which contacted the housing association. Soha said it would be happy to work with residents in improving the space.

Ella said: “It’s fantastic news that the Mayor wants to help. We’ll go round and ask people what they would like to do there. I’m very proud that my handwriting is good enough that she thought it was great. It’ll be fun to do the gardening and maybe I could put a ‘no fouling’ sign up there as well.

“I think it would be nice for our neighbours to have that place to go and relax and have some fun.

“Maybe we could put a couple of benches there and more grass and a fence around the trees because people put rubbish in there.

“We could also grow some fruit trees because people may like to pick fruits.”

Ella’s mother Emma said: “We’re very proud of her for writing the letter. She’s very thoughtful about the community and wanting to make change.”

Emma Langstaff, Soha’s estates manager, said: “The bramble was cleared earlier this year following a report from local residents that it had become very overgrown.

“To date there are no plans for the area. However, we welcome suggestions from local residents as Soha is currently identifying several areas to carry out environmental projects that will benefit the community.”