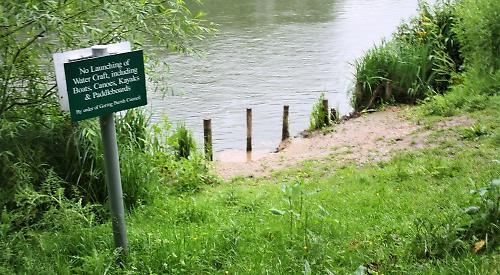 BOATERS are being urged to stop launching their craft from a riverside plot in Goring.

The parish council, which owns and manages the public green space at the foot of Ferry Lane, says the long-standing problem has become much worse because of this month’s sunny weather.

Two bollards which stop people from reaching the site by car were recently ripped out of their mountings and thrown into the River Thames and the council managed to retrieve only one of them.

A replacement is likely to cost about £350 and until that has been installed, it is much easier to carry canoes, kayaks or paddleboards on trailers to the water’s edge.

On one occasion, a vehicle carrying several craft was photographed by a member of the public who reported it to councillors.

In addition, boaters using powered vessels on the Thames sometimes moor at the bank for a break or picnic, even though there are signs forbidding this.

The council says exposed ground at the water’s edge is starting to crumble and aquatic grasses are being crushed, which is undoing the restoration work carried out in 2013 at a cost of £30,000. Chairman Kevin Bulmer said the bollards could be replaced with a gate, although he added that this had not been discussed by the council or costed.

Councillor Bulmer said: “It’s a shame that bank is being damaged again because it cost us an arm and a leg to put it right and people should not have been using it in the first place.

“It all started with the sunny weather — people think it would be nice to have some fun on the river, especially after the lockdowns, and don’t stop to consider the impact. They seem either unable to read the signage or just assume it doesn’t apply to them. Some people also decided it would be fun to chuck the bollards in the river, which is very selfish and we’re still not sure how they managed that.

“They can be removed using a standard key which the fire and ambulance services have, so perhaps somebody managed to get hold of one.

“All kinds of boats are coming up Ferry Lane now and with official moorings filling up elsewhere, we’re seeing the bigger ones mooring up.

“Our councillors always walk around the village while looking into various problems but it’s hard to enforce anything unless you catch people in the act. You can’t be everywhere at once.

“We’ve been sent photographs but unless they identify somebody you can’t do a lot with them. We don’t even know whether this is being done by people living in the village or coming from outside.”

The council considered installing a £3,000 launch point to complement the existing ones at South Stoke, Pangbourne and Benson but this wouldn’t have been accessible to disabled people because the bank is too steep for a wheelchair ramp.

Cllr Bulmer said: “That never gained traction because it throws up all kinds of issues with parking.

“It’s a popular site so you’d attract a lot more traffic, including vehicles with trailers, and with no control over how many people showed up.

“It would also be hard to police with our limited resources. It’s a nice idea on the face of it but has a lot of negatives if you look into it a bit more.”

Signs forbidding vehicle access or launching water craft were vandalised in 2019, apparently by those who disagreed with the rule. These were replaced at a cost of several hundred pounds.

The only activity allowed on the land is fishing.