Steps not fixed due to ownership mystery 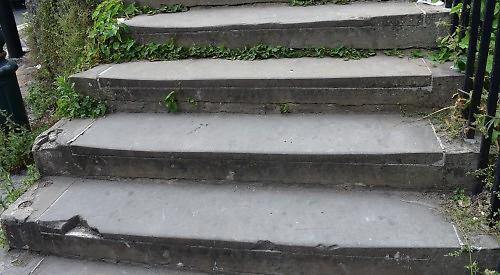 BROKEN steps leading to St Mary’s Church in Henley cannot be repaired until their ownership is established.

Rector Jeremy Tayler and churchwarden Robin Hartley believe the steps, which are at the back of the church in Hart Street, are owned by South Oxfordshire District Council.

However, the council has denied the steps are its responsibility so until the ownership mystery has been solved the church can’t repair them as it would be liable if someone fell on them.

The stone steps are uneven and chipped as well as having weeds growing on and around them.

Some of the rails at the top of the steps are broken and red and white striped tape has been wrapped around them to warn people.

Rev Tayler, who has been in post since September 2018, said he was regularly stopped in the street by residents complaining about the condition of the steps. He said: “The path above the steps is church land but the steps themselves are no man’s land.

“There used to be a rail on both sides of them but it broke four or five years ago.

“We can’t repair them because we’re not insured so if we do work on them and someone gets hurt we would be liable. It’s a beautiful site that needs to be maintained. When people come back into town from the regatta on a hot and sweaty afternoon it’s not good for the steps to be in this condition.

“People say it’s embarrassing for the town and it’s not safe.”

A member of the St Mary’s congregation donated money to have the steps fixed and the church council has obtained quotes for the work.

Rev Tayler said: “It’ll be restoration work. Church architects would do it in keeping with the English heritage of the church.

“The really frustrating thing is we have the money to fix them but it’s the ownership that is the problem.

“It’s embarrassing to be given money and not do anything with it.” Mr Hartley said: “This has gone on for three or four decades. We’ve tried the county and district councils but no one will claim ownership.

“It’s really frustrating when the church gets complaints about it. When people come over the bridge, the steps are one of the first things you see.

“We’ve approached architects who have provided some quotes and it’s not an enormous amount. It would be nice to do the work as it’s unsafe.”

There is no pavement running directly alongside the church towards the town centre so Rev Tayler believes it would be dangerous to close the steps off completely as it would encourage people to cross the busy road.

The last contact the church had with the district council was about two-and-a-half years ago.

A  district council spokesman said the council did not own any land or property at the church.

He added: “We have confirmed with the church in 2018, and again in 2019, that as the landowner it is responsible for maintaining and repairing the steps as they provide a direct access route to the building.”