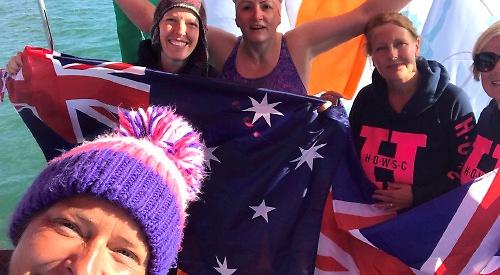 THE Henley Mermaids will attempt to swim Bristol Channel in relay on July 22.

Last summer they swam the Channel and raised more than £34,000 for Henley Music School, which was founded by Ms Reineke in 2010.

The Bristol Channel is a 45km stretch of water from Ilfracombe in Devon to Swansea in South Wales, which is hazardous because of the strong tides.

Ms Reineke, 48, of Damer Gardens, Henley, said: “We are a great team and we won’t let each other down, so hopefully we will do it.

“The sea is much more buoyant but I prefer the river. I also get dreadful salt tongue when I go in the sea.

“All your technique goes out of the window because it is basically swimming to survive. The waves are huge, there are jellyfish and you are trying to focus on your breathing, so it is a battle.”

The Mermaids are swimming in aid of Sunrise for Brain Conditions, a charitable partnership that supports research into Huntington’s disease, Parkinson’s disease, motor neurone disease and multiple sclerosis.

The Mermaids, who are all members of Henley Open Water Swimming Club, are due to set off at around 9am and should take between 15 and 24 hours to complete the swim.

Ms Reineke said: “We are only interested in finishing. Unless you are an elite swimmer, it is silly to put timings on it.

“It all depends on the tides and the weather. It is all in your mind and that’s where lots of people fail.”

The women took a group trip down to Dover last week to get more practice in the sea. Ms Reineke said: “We did two hours’ swimming but it was really misty and we all felt like we had done enough. Sometimes, you can worry if you have done enough but we know what we can do.”

The Mermaids will be accompanied by a rigid inflatable boat where they will rest between each leg of the swim.

Their two swims are part of a series called the Triple Crown, with the final event being swimming the North Channel from Northern Ireland to Scotland.

This is the hardest of the three because although the distance is about the same as the Channel, the sea here is renowned for it strong currents.

The Mermaids have set their sights on doing this swim next year, while Ms Reineke hopes to swim the Channel on her own in 2023 in aid of the music school.

• Four men called the Henley River Rats were due to take on the same challenge on Wednesday. If they are successful, they will become the first team to swim the Bristol Channel in relay without wetsuits.