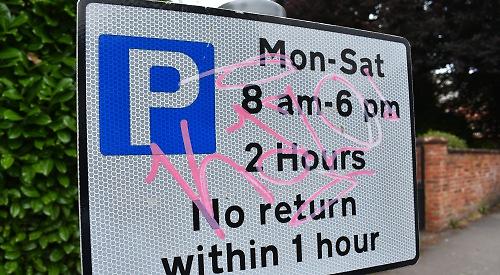 THE Mayor of Henley has issued a message to a graffiti artist — “Grow up, you idiot”.

Sarah Miller spoke out after a series of “tags” were sprayed on street furniture around the town.

She called the unknown offender “immature” and appealed to anyone who knows his identity to contact the town council.

The name “Kazo” has appeared in several places in recent months, notably on the railway overbridge in Mill Lane.

Both sides of the metal bridge are covered with graffiti, as the Henley Standard reported last month.

At the time, this included a swear word which was daubed on one side in white paint.

Network Rail, which is responsible for the bridge, refused to clean it but agreed to remove the offensive material.

This was done but within days the graffiti returned with the words “Kazo is king” sprayed over a patch of yellow paint. The same tag has also been sprayed on a bus shelter in Reading Road, near the junction with St Mark’s Road, and on a parking sign in the same street opposite Upton Close.

The Mayor said: “I find it really upsetting. I don’t understand why people feel the need to do this and I know it is frustrating for residents.

“The mentality of someone who thinks this is a cool thing to do —  to splash their name all over the town — I just don’t know what is going through their head.

“We simply don’t want this sort of thing in the town and we will have to think of ways that we can remove the graffiti. Of course, there is going to be a cost to clean it up.” Councillor Miller said she didn’t want to see graffiti but was at a loss as to how to prevent it.

“We can keep removing the graffiti and then the idiot will keep doing it,” she said.

“I don’t see how we can stop it totally. All we can do is keep removing it and hopefully they will get bored and go somewhere else.

“I would ask anybody who knows who this person is, to call or email me or anyone else on the council. They can do it discretely.

“Somebody must know who this person is. Let’s talk to them and ask them politely. It is such a silly and immature thing to do.

“I hope we can get to the bottom of this. Hopefully, if we find out who it is, I can buy them some crayons and a pad and they can draw some pictures in that and not on the streets of Henley.”

The graffiti on the railway bridge was first raised by Geoff Luckett, chairman of the Henley Society, a conservation group.

He called the bridge an “eyesore” and complained to Network Rail.

Mr Luckett said: “One of our members offered to go down and scrub it with a wire brush and then repaint the bridge.

“It would be quite a big job but Network Rail says they can’t have anyone who is not a professional working so close to a live railway line.”

A company spokesman said: “While we recognise graffiti can be unpleasant, the cost of removal can often be expensive.

“The safety of the public, passengers and our staff is our number one priority and our track engineers regularly check the condition of our rail infrastructure.

“The overbridge is not in need of repair and therefore is not something we would prioritise to do.”