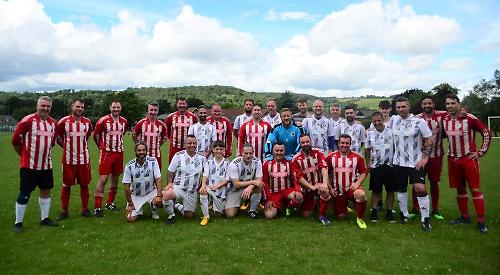 A FOOTBALL match in honour of a former Woodcote man who died in a car crash raised £3,200 for charity.

The match was in memory of Dom Defazio, 42, who spent most of his childhood in Woodcote and played as a striker for both teams in his youth as well as Woodcote’s Black Lion pub team and later jointly managed Checkendon FC.

The self-employed carpet fitter and father of three, who attended Woodcote Primary School and then Chiltern Edge School in Sonning Common, left the area about two decades ago but came back regularly to see friends.

He died in a collision near Blewbury on December 11.

His loved ones recalled him as a fun-loving practical joker who was “fiery” on the pitch but friendly and approachable off it.

The match at Sheepcot recreation ground in Goring, which ended in a 4-4 draw,  began with a minute’s silence before the players and spectators burst into applause.

Sam Church and Jamie Vickery both scored twice for Goring.

Players were substituted every 10 minutes or so to ensure everyone had time on the pitch.

The takings from the match fees were boosted by a silent auction with prizes donated by local businesses including Virgo Beauty and the Miller of Mansfield restaurant, both in Goring, the Red Lion pub in Woodcote and Goring estate agents Davis Tate and Warminghams.

The proceeds will go to the Bliss and SSNAP charities for premature babies as Mr Defazio’s youngest son Santino, four, was born at under 24 weeks and his twin brother Angelo died less than a month later. The teams were competing for the Dom Defazio Memorial Shield, which was commissioned by organisers and childhood friends Lee Clark, formerly of Woodcote, and Mike Read, who still lives in the village.

Because there was no winner, the trophy was presented to Mr Defazio’s father Dom, who watched from the touchline with about 100 spectators, including Mr Defazio’s mother Maria, younger sister Sophia and daughter Elle, 19.

The match, which will hopefully become an annual fixture, was going to be held on Woodcote village green but was moved at the last minute because of a conflict with another fixture and concerns about a shortage of parking.

Mr Clark said: “It was an absolutely fantastic day — I could hardly walk the morning afterwards but it was worth the effort.

“Some of us hadn’t played football in years so it was very emotional and we were gutted that Dom couldn’t be with us, though I’m sure he was looking down and taking the mickey as usual.

“The older players weren’t always able to keep pace with the younger ones but it made them feel 25 again, even if it left a lot of them with aching limbs.

“We’re so thankful for the support from local businesses and also to Goring FC for arranging a new venue at the last minute, which saved us a lot of stress.

“During the game, we had loads of spectators asking whether they could quickly change and join in. There was so much enthusiasm that I could easily have started another game straight afterwards.”

Mr Read, a groundworks contractor who lives in Croft Way with his partner Heidi Price and their three children, said: “What an amazing morning — there was such a great atmosphere with loads of old friends catching up.

“It was brilliant to talk with some of the older players who were just finishing their careers when I was starting out. They particularly enjoyed getting out there again, like in the old days, and gave it everything.

“We can’t wait for next year’s match, which is going to be bigger and better. I’m definitely going to hit the gym more to make sure I’m fitter.”

Santino was also due to attend but couldn’t because of illness.