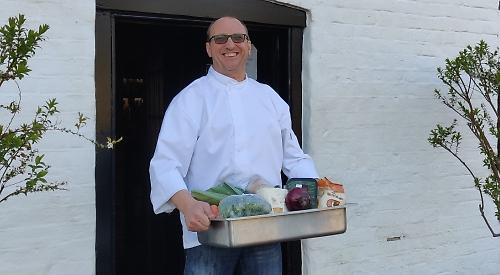 A RESTAURATEUR has avoided prison after being caught with more than 40,000 indecent images of children.

Paul Burrows, a former executive chef at the Highwayman Inn near Checkendon, was living at the pub when he was arrested following a police raid in October 2019.

The officers, who were acting on a tip-off, found he had downloaded more than 8,200 “category A” photographs, which depict the most serious levels of abuse, and more than 36,200 in the lesser categories B and C.

Burrows, 57, had acquired these over many years, some showing children as young as four, and had also collected images showing the abuse of animals.

He admitted the offences when questioned and later pleaded guilty to three counts of making indecent images, which refers to the act of downloading, and a further count of possession.

At a hearing at Oxford Crown Court on July 1, Burrows was sentenced to 20 months’ imprisonment, suspended for two years, and ordered to carry out 180 hours’ unpaid work plus 40 days’ rehabilitation activities.

He will also be subject to a sexual harm prevention order limiting his internet access for the next decade, during which time he will be on the sex offenders’ register, and had to pay £425 in prosecution costs and victim surcharges.

Det Con Michelle Taylor of Thames Valley Police’s paedophile online investigation team at Abingdon police station, said: “Burrows was found in possession of many thousands of images, more than 8,200 of them at the most serious category A level of vile sexual activity with children.

“He also had more than 5,200 category B images and more than 31,000 images of category C, along with 86 images showing extreme pornographic images relating to animals.

“Given the weight of evidence against him, he had no option other than to plead guilty, and he has now been sentenced accordingly. Possession of and making images such as this is not a victimless crime. Victims are often subjected to extreme levels of abuse in order to produce these images.

“Thames Valley Police is committed to keeping children safe from harm and will always robustly pursue anyone who is suspected of this type of offence and, where evidence exists, will place offenders before the courts.”

Burrows, who has a teenage daughter, says he is remorseful and seeking help for his compulsions.

Staff and trustees of the Highwayman said they knew nothing of his arrest or conviction until last week, when he suddenly departed and it is not known where he is now living.

Burrows remains an active director of The Highwayman Inn (Checkendon) Ltd, a registered company which was running the business until then.

But the trustees, who live nearby and own the freehold, say they have terminated his lease with immediate effect and will run it themselves so he will make no money from it.

They told customers on Facebook: “We are committed to continuing as a team and while the last 18 months have been difficult for us all, we will continue to offer our renowned country atmosphere in which you can enjoy our excellent food.”

Madalin Andrej, who has worked at the Highwayman as a chef for 10 years, takes on Burrows’ old job.

Barbara Bothova, the front of house manager, said she and her 10 colleagues were hoping that customers would continue supporting the business.

She said: “It was a terrible shock when we heard the news and we were appalled. We felt so bad about the situation.

“We are very keen to distance ourselves from [Burrows] because we want nothing to do with him and this is not what we are about.

“We’re pleased that people have expressed support because we don’t want this to damage our reputation when he has nothing to do with us any more.”