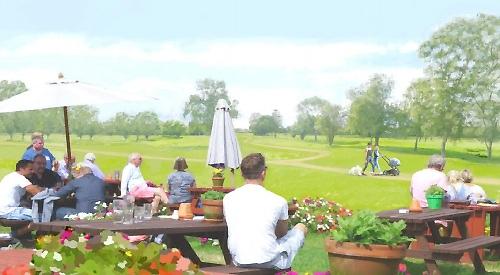 A CAMPAIGN group opposed to plans for 257 new homes at the former Reading Golf Club in Emmer Green have put forward an alternative proposal.

Keep Emmer Green wants the land off Kidmore End Road to be turned into an arboretum with a a café, outdoor theatre and playground.

But the club, which merged with Caversham Heath Golf Club in Mapledurham in April to become The Caversham but still owns the land, has accused its opponents of trying to “muddy the waters”.

It has submitted a planning application in partnership with developer Fairfax to Reading Borough Council which is due to be considered on Wednesday.

This prompted more than 3,000 objections, which is thought to be a record for a single application in the borough.

Keep Emmer Green says its proposal for Grove Arboretum would be a “more fitting legacy” and would bring a number of benefits to the community and wildlife.

It says: “Collaboration with local and national academic and botanical establishments such as Kew Gardens, Reading University and Oxford Arboretum would put Reading on the map and draw interest from visitors.

“There has not been an arboretum created in Berkshire in more than 100 years. When would be a better time if not now? A traditional orchard on site would create a focal point, a crucial habitat for flora and fauna and a place for education and skills development.

“The conservation of the habitats on site allow for a healthy ecological network to establish from Reading into South Oxfordshire.

“The site is a vital green lung, providing clean air to the area and the establishment of the arboretum would further increase air quality.

“The closure of Reading Golf Club offers the people of Reading a fantastic opportunity to make environmental provision for the future of the town.

“Reading is a central hub for employment. We have an unmissable chance to create long-term employment in Emmer Green and build the local green economy with a focus on green transport [and] seasonal activities for the community.

The campaigners suggest connecting existing public rights of way to create access from Hemdean Road through Kidmore End Road and up to Clayfield Copse, which could also be made suitable for cycling. But a spokesman for Reading Golf Club said: “This ‘plan’ presented by Keep Emmer Green is nothing more than yet another desperate and misleading attempt to muddy the waters of the debate about the future of our private land.

“We have spent years working closely with Reading Borough Council to develop a sustainable plan for the future of our land at Emmer Green, which would create family and affordable homes with gardens, publicly accessible open space, a medical centre and a wonderful new recreational facility.

“We look forward to continuing our discussions with the council in the days and weeks ahead and are very confident that our plans will bring real benefit to Reading.”

The club’s planning application was resubmitted after the original version, which was for 260 homes, received more than 2,000 critical comments and it says that more than 65 per cent of the land in Reading borough would be retained as green space.

Opponents say the development would make the existing problems of congestion and pollution worse and put a strain on school places.

The club decided to sell the land four years ago because it was at risk of insolvency due to declining
membership.

Reading and Caversham Heath merged as both clubs were losing significant sums of money every year and  83 per cent of Reading members supported this.

Gary Stangoe, manager at The Caversham, said the housing
development was about leaving a “responsible” legacy at the old site. Earlier this year, the club opened a new family golf centre on the South Oxfordshire side of the land in Chalkhouse Green.

Ian Morgan, Keep Emmer Green member and Highdown Hill Road resident, said: “We felt that this was the first step in the journey — if we didn’t have a plan for what we wanted in the community, then how could we object against a housing estate.

“Clearly, if planning permission is given [to the golf club] then we wouldn’t have much hope of acquiring the land, but if and when they do start to run out of options, then I’d hope we would be in a position to acquire the land.

“With the Chilterns AONB talking about expanding eastwards, and Reading once again submitting proposals to become a city, we also believe that an arboretum would fit perfectly with both proposals.”

Matt Rodda, MP for Reading East, has opposed the club’s applciation, saying it would lead to more congestion, put pressure on local services and spoil a greenfield site.

He said he preferred the campaigners’ vision.

He said: “I think that if it went ahead, it could be really positive.

“It offers a wide range of leisure activities and benefits wildlife and it is important to let young people enjoy open spaces and explore outdoors.”