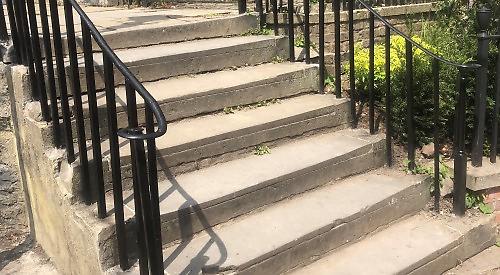 BROKEN steps leading to St Mary’s Church in Henley have been repaired by artist Clive Hemsley.

Rector Jeremy Tayler and churchwarden Robin Hartley said the church couldn’t repair the steps as they are not owned by the church so they would be liable if someone fell on them.

They believed the steps, which are to the rear of the church in Hart Street, are owned by South Oxfordshire District Council but the planning authority has denied responsibility.

Mr Hemsley, 70, decided to repair the steps himself to prevent any accidents after he was asked by a member of the church to get involved.

He said the work “had to be done” and paid for the rails on the steps to be replaced and even repainted some of the old railings at the top himself. The work was completed on Monday after five days.

Mr Hemsley said: “At the Henley Royal Regatta, hundreds of people use those steps and some fall over and there will be an accident.  The old railings were taken off a couple of years ago because they were rusted through. What we did was take the rusted ones away and replace them with new steel ones that were cut down to size.

“We then redrilled the holes in the steps for the railings to go into and then used resin and cement to weld them in. I then did my painting at the top.”

Mr Hemsley, who lives in Hart Street, said the bottom of the stairs looked “messy” so he might work on adding some flowers there next to “smarten it up”.

The artist said he was “disappointed” the church didn’t take responsibility for repairing the steps themselves.

He said: “It’s like putting your head in a bucket and saying you don’t want to know. So I didn’t speak to the church about money, I just paid for it myself.

“It wasn’t a question of donations, it was a question of safety. If you don’t get the safety right someone will fall over and break their leg.”

Mr Hartley said it is a “very kind and courageous gesture” from Mr Hemsley and it’s a “plus for the town”.

“It’s totally off his own bat,” he said. “We’ve had no discussions with him about it. We don’t own the steps and we’ve been trying to search for who does for many years so well done to Clive for doing it. It’s a courageous thing to have done and a kind thing.”

Following the appeal by Mr Hartley and Rev Tayler to find out the owner of the steps, nobody came forward.

Mr Hartley said: “We haven’t come any closer to finding out who owns them — it’s still completely unknown. It’s awkward and we just don’t know but Clive has done it off his own bat and takes all the risk.”

Mr Hemsley has previously been investigated three times by the planning authority for carrying out work without permission.

In 2017, the artist installed a “living” wall of plants on the side of his home, which was later approved. A year later he glued two strings of 800 LED lights onto the Grade I listed Henley Bridge, which were then removed. In April he appealed against an order to tear down an “unlawful” studio he built in a field near Rotherfield Greys.