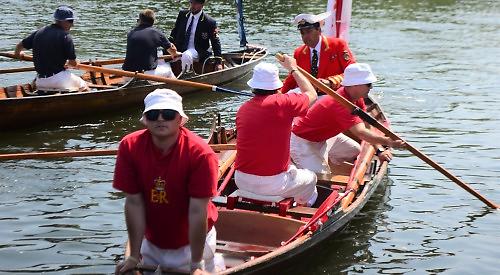 THE swan population in the Henley area is thriving despite increasing levels of river pollution.

David Barber, the Queen’s swan marker, led the annual swan upping ceremony on the River Thames as it passed through the town on Wednesday.

The birds have been owned by the Crown since the 12th century and the census is carried out every year to check numbers and ensure they are in a healthy condition.

Last year, the census was called off for only the second time in its 900-year history because of the coronavirus pandemic. It returned this year over three days rather than the usual five.

Mr Barber, who lives in Henley and is responsible for ensuring the swan population on the River Thames remains healthy, was accompanied by representatives of the Crown and the Vintners’ and Dyers’ Livery Companies, all of whom travelled down the Thames in traditional wooden rowing skiffs.

The group was also accompanied by representatives from the Swan Support charity.

The group had set off from Eton on Tuesday and finished in Moulsford today (Friday).

They arrived at Hambleden Lock at about midday, where about 40 residents and tourists waited to greet them, before the party continued upstream towards Henley.

They shout “all up!” when they spot the birds then catch and restrain them before weighing, measuring and checking them for injuries.

At Hambleden Lock, they spotted a swan and four cygnets and stopped to check they were healthy.

They also stopped on land near Phyllis Court Club in Henley after spotting a family of two adult swans and two cygnets on the bank.

Mr Barber and his colleagues then enjoyed lunch at Leander Club before continuing towards Sonning, where they finished on Wednesday.

Mr Barber, who has been leading the census for the 28th year, said he couldn’t say how many swans he had counted so far but he found the cygnets to be healthier than in previous years. He said: “It was really hot but we had a really good day, we saw lots of healthy cygnets and adults as well.

“The Henley portion of the river was a bit disappointing as we only had one catch so far, but we are expecting more as we continue along the Thames.

“We found them in very good condition and they all looked very fit — the people of Henley have been feeding them well, the cygnets we have seen are definitely larger than in previous years.

“This year was different from other years pre-covid, as we have had a lot of injuries and shootings, which have always been a problem, but we also had a lot more pollution and oil spillage, all sorts of pollution really, during lockdown than in the past.”