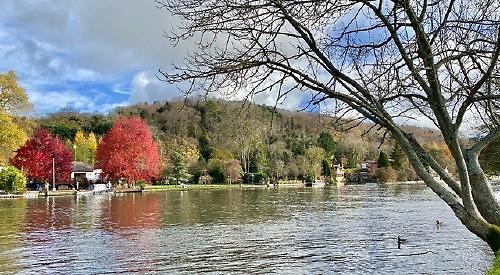 A WOMAN who overcame her addiction to prescription painkillers by practising various alternative therapies has
published a book to help others improve their health.

Philly Lay battled with severe depression and post-traumatic stress disorder for years following a series of tragedies between 2012 and 2018, including an operation which went wrong and the death of her mother and three other women close to her.

She began relying on morphine which she was given to cope with her physical pain and also drank heavily, going through phases of being obese and others of being severely underweight. This concerned her friends but they couldn’t stop her behaving self-destructively.

But the 57-year-old, who lives in Turville and works as an interior designer, turned her life around after developing a benign tumour in her throat about three years ago. This was successfully removed and the experience made her want to make the most of her life.

She began learning about alternative treatments including the “emotional freedom technique”, or “tapping”, in which participants repeatedly tap on different parts of their bodies to calm feelings of anxiety. These correspond to acupressure points, which according to traditional Chinese medicine can trigger the body to heal itself.

The technique has been championed by celebrities including comedian Russell Brand, who lives near Hambleden, television presenter Fearne Cotton and Harry, Duke of Sussex, who was filmed trying it earlier this year as part of a counselling session.

Ms Lay also practises intermittent fasting, only eating at certain times of day, as well as taking regular cold showers and walks in nature, sometimes barefoot, during which she hugs trees as she believes this absorbs their natural energy.

She has outlined these techniques and others in The Natural Wellness Journal: A Lay Person’s Guide To Your Natural Health Systems, which includes blank pages for readers to note their reactions and track how they are feeling daily.

She has also produced a series of videos demonstrating meditation techniques and walks in the countryside around her home.

Ms Lay, who grew up in Brightwell-cum-Sotwell then lived for several decades in London before returning to the Henley area, says her methods have given her the energy of a 20-year-old and she is now optimistic about her future where previously she only focused on surviving each day.

She says her daughters, who are 18 and 20 and attended Rupert House School in Henley, jokingly describe her new lifestyle as “mental” but are proud of her transformation.

Her problems began in 2012 when her older sister Tricia died of motor neurone disease as she was battling back pain caused by long-standing injuries incurred as a classical ballet dancer in her childhood and young adulthood from the age of about 11.

She was prescribed morphine skin patches to dull this and would sometimes apply so many that she came close to unconsciousness but the prescription was never stopped.

In 2014, she underwent a spinal fusion at a private hospital in which her back was cut open and had several spinal discs meshed together. The surgeon administered a local anaesthetic so she wouldn’t be in pain but missed the nerve so she woke up in agony.

She had to endure this for several hours because the drug was still in her system and giving another dose could have killed her.

Ms Lay said: “One disc had completely collapsed so they had to take it out and enclose it in a metal cage while cutting bones and nerves — it was a massive operation and I had no pain relief straight afterwards.

“The scream I gave when I came around will be with me until the day I die. At that point, my body shut down and I mentally withdrew from the world to hide from the pain. They phoned my husband and asked him to bring the girls and he assumed it was to say goodbye.

“My life was saved by the hospital registrar, who stayed by my bed and told me to find my ‘happy place’ until the girls came in. Once I heard their voices, I realised I wasn’t going to die but I was in a terrible state and the next few years were a blur. I’ll never forget lying in my bed and pressing the morphine drip as many times as I could. I couldn’t even speak because I was in so much shock.”

Over the years that followed Ms Lay, who has since divorced, lost a close friend to cancer and then her mother Monica from complications of diabetes and dementia. Her health was poor during this time and worsened when she lost another friend to cancer in 2018.

She barely got out of bed for two years except in emergencies and has very few memories of this period.

She said: “It was terrible — I was suffering from chronic fatigue and a feeling of brain fog and I’d stopped eating. People noticed how thin I was but I couldn’t bear to eat.

“When you’re addicted to opioids, you can’t foresee any future. One friend came round and saw me drinking morphine straight from the bottle so they tried to take it from me and I was having none of it. I have no memory of that but I was shoving things down my neck as quickly as I could and don’t know how I survived.”

She said her neck tumour marked a turning point as she didn’t want to depend on medication forever. She threw herself into recovery by watching videos on YouTube and attending courses in tapping which gave her the courage to gradually ease herself off the drugs.

She became a qualified practitioner and now taps points on her face, arms and collarbone daily and often fasts until lunchtime, which she says gives her more energy. She also practises breathing techniques which are said to have a calming effect on the nervous system, including one in which she exhales fully and holds her breath for as long as possible.

She said: “It started with diet and nutrition and getting outside every day. Tapping made a huge difference. People think it’s completely mad, as I did on my first course. I saw all these people tapping away and thought ‘this is absolutely bonkers, there’s no way I’m going to stick with this for long’.

“But within 10 minutes of trying it, I was screaming on the floor and the mentor was encouraging me to stay with the feeling of pain until it went away. Two hours later, I felt amazing. I couldn’t make sense of it at first but it worked.”

Ms Lay was going to open a retreat at her home where she would teach these techniques but had to put this on hold when the coronavirus pandemic hit so she wrote the book instead.

The 232-page volume also recommends regular high-intensity interval training, or vigorous exercise in short bursts, and dancing regularly as well as finding reasons to laugh every day as this produces chemicals which improve mood.

Ms Lay said: “You can easily get conventional medicine from a doctor but I was determined to teach myself and decide what worked because I didn’t want to become one of those middle-aged women who’s always got a mountain of medicine by her bedside.

“My mother was on all sorts of drugs and the list kept growing as they prescribed more to counter the side-effects of previous ones. Now that I’m living a whole new lifestyle, I knew I had to share it with other people because these techniques are free but utterly life-changing.

“Other techniques are much easier, like laughing. Just one minute can boost your immune system for hours and if you can’t find a reason, you can just hold your mouth in a smiling position as it still registers with your brain. Like so many of the ideas in the book, it sounds crazy but it’s totally effective.”

Ms Lay will continue producing videos and still hopes one day to open her retreat.

She said: “These exercises are great for building up immunity, which is important while covid is still with us. There’s a lot of fear going around but few people realise how much of a natural capacity we have for healing ourselves.

“After everything I’ve been through, I wouldn’t even take an aspirin nowadays — I just don’t go there. A lot of people think I’ve gone mad but the face that my life has changed so much for the better is evidence that it works.”

• The Natural Wellness Journal: A Lay Person’s Guide To Your Natural Health Systems costs £12.95 from Amazon.