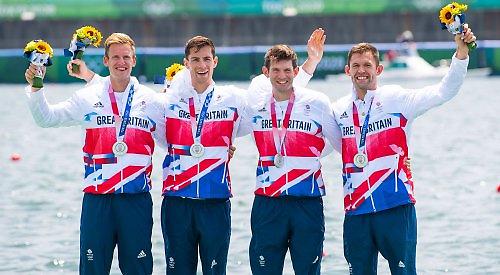 ATHLETES from Leander Club in Henley picked up Great Britain’s first Olympic rowing medal in the early hours of this morning (Wednesday).

The quad, who won bronze at this year’s World Rowing Cup II, held off late charges from Australia and Poland, sparking jubilant celebrations on the water.

But Team GB failed to win a sixth straight Olympic gold in the men’s four as they finished fourth.

Helen Glover's bid for a third Olympic medal continued as she reached the final of the women’s pairs on her comeback alongside Polly Swann.

After a disappointing display in the heats, the pair led for much of the first semi-final before qualifying in second place behind Greece after a tight finish.

In the men's quadruple sculls, the Netherlands added Olympic gold to their World Championship title as they won in a world best time.

The Dutch crew clinched victory in five minutes 32.03 seconds with the British crew 1.72 seconds behind.

Beaumont, 27, who lives in Nettlebed and is captain of Leander, said: “I'm so happy, we had an outside chance of a medal, so to take it to them. We did it.

“It was wild out there - the conditions were rough with a tailwind, but it is what we are used to back home.”

He added: “Thank you everyone back at home for your support. Best fans in the world.”

But this was to be the best result of the this morning’s racing after Team GB missed out on medals in three other finals.

The biggest disappointment was the end of their dominance in the men's four, following five successive gold medals at Olympics.

Leander’s Matt Rossiter and Sholto Carnegie, with Ollie Cook and Rory Gibbs, were regarded as the nation's best hope of a gold medal as they are reigning European and World Rowing Cup II champions.

But they were second going into the final 500 metres of the 2,000m race at the Sea Forest Waterway in Tokyo Bay, before fading and veering off line towards the Italian boat.

“I'm responsible for the steering. I screwed up,” said an emotional Cook, who wiped away tears in the post-race TV interview and was consoled by Carnegie.

“I forgot the steering a little bit and that cost us a medal. To the lads, I'm sorry I didn't steer us the best line at the end.”

All four of the British crew were making their Olympic debuts. Australia took gold, with Romania and Italy also on the podium.

In the women's fours, Leander’s Rowan McKellar and Karen Bennett, with Hattie Taylor and Rebecca Shorten, were pipped to bronze as Ireland won their first medal of the Games behind gold medallists Australia and the Netherlands.

British pair of Leander’s John Collins and Agecroft’s Graeme Thomas finished fourth in the men's doubles sculls after being unable to make a late charge for a medal.

Collins, 32, of Upton Close, Henley, said: “I thought if we got it really right we could finish on top and a medal would be very do-able.”

France's won gold, finishing 0.20 seconds ahead of the Netherlands, with the Chinese pair taking bronze.